A staple of the Japanese diet, nukazuke is served at most traditional meals. The mild taste, and variety of vegetables, and occasionally seafood, which can be fermented using this technique lets it pair with almost any dish and is welcome at tables any season of the year. 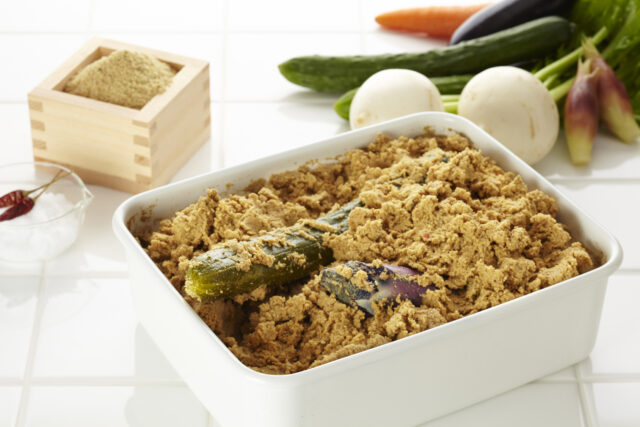 Nukazuke is Younger Than You Think

Nukazuke has a relatively short history, going back to the sixteenth century compared to traditional soy pickling techniques which date back to the sixth century. Until very recently almost every home would have an active nukazuke pot at hand.
It was so essential to daily life that the pots would feature in the tokonoma, an alcove of the family room where scrolls, ikebana flowers and seasonal decorations are displayed in many houses. In the event of earthquakes and other natural disasters nukazuke could travel with you and provide a healthy foodstuff requiring no preparation.

The health benefits include anti-aging properties, a strengthening of the immune system, and a reduction in the intensity of some allergies and skin conditions. It’s most notable benefit is in the aiding of digestion through increasing lactic acid in the intestines. Nukazuke is also high in protein, potassium, iron, magnesium and calcium. It is also rich in vitamin E and the B vitamins, especially vitamin B1, also known as thiamine, which helps reduce stress and fatigue. The amount of vitamin B1 found in vegetables fermented in nuka is increased at a rate of twelve to fifteen percent of that found in their raw form.
Although nukazuke items are often translated into English as pickles the taste and texture is not at all like that of what most western people would think of as an food that has been pickled in a brine. It’s next to impossible to name it anything but pickles if translated, but it’s better to call nukazuke, nukazuke.

Instead of a liquid brine, nukazuke is packed in a fermenting compound which is more like a wet sawdust in look and feel. Nuka is rice bran that is a byproduct of shucking white rice. This is the key ingredient of what will become the nukadoko or fermentation bed. Other brans may be used, but because of the considerable fat content in rice bran it requires less liquid to be added to the nukadoko, and it is the traditional method. If beginning your own nukadoko abroad, or even in Japan for that matter, starter kits are available which simply require adding water and even come with their own containers. But maintaining a nuka bed over a long term is very hands on, requiring daily aeration for about thirty seconds at a time and the needs to be topped up with bran from time to time as some is taken out each time you dig in for a piece, so it’s worth the extra effort to start from scratch. 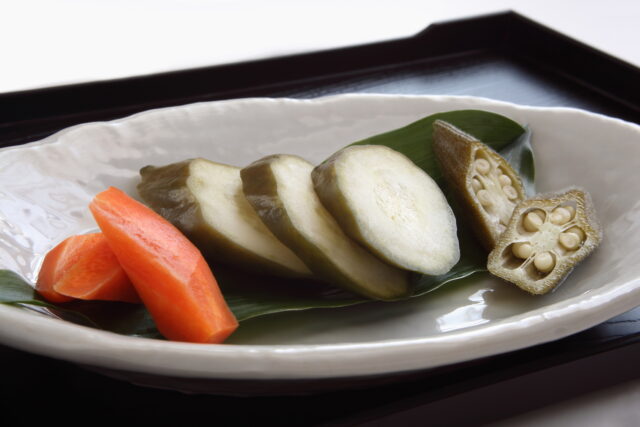 The basic ingredients used in a homemade nukazuke fermentation bed are pretty simple. You’ll need 1 liter of kombu dashi (kelp broth) to 1 kilogram of rice bran mixed with 130 grams of salt, or 140 grams in hotter more humid climates and about half a slice of bread. To this you could add a half a cup of beer to help kickstart to fermentation. The function of the salt is too make sure the bed doesn’t ferment too rapidly, so be careful not to add too much as this will have the opposite effect and essential kill of the lactobacilli responsible for initiating fermentation. Dried chili pepper will help to keep mites and worms at bay, and your nukadoko can be flavoured with a bit of ginger, dried shitake or a bit of kombu for depth or fruit peel for sweetness. Avoid using chlorinated water or processed salt as they will inhibit fermentation. You will need to add a small piece of vegetable such as a bit of cabbage or unpeeled radish or carrot to act as a starter bacteria. This will need to replaced every couple of days, giving you a chance to taste test the progress of the nukadoko.

This mash is all loosely packed down in a sterile container. Most often plastic buckets are used for larger scale retail production, but glass or clay jars are more aesthetically pleasing. Cover this with a breathable cloth and keep it at room temperature. If your place gets cold cover your nukadoko and keep it warm with water bottles. It’s important to mix up and repack your fermentation bed once a day, or twice in hot humid weather, in order to allow it to aerate. It will be ready to use anywhere from a week to a month. When it has matured it should have a slightly sweet earthy aroma, never sour or alcoholic.

If you notice white spores collecting on the surface, remove them and check throughout the bed to be sure the mold hasn’t spread throughout the nukadoko, in which case you’ll need to discard the entire mixture. If it was indeed just the surface that was affected sprinkle about a half centimeter of mustard powder over it and aerate more frequently for a while until the bacteria culture has regained it’s balance. A damp nuka bed prevents aeration and you will need to add more rice bran and a bit of salt. Salt should also be added if the weather gets quite hot in order to slow down the fermentation slightly.

Once the bed is ready, tuck the vegetables of your choice throughout it. It’s advised that the vegetable be dried to the point of slight dehydration and if you choose to may be slightly salted. Traditionally, radishes (daikon or kabu), cucumbers, eggplants, carrots and cabbage are used for nukazuke, but there are really no limits. If the resulting pickles are not sour enough or too salty in taste, it is because the nukadoko is not fully mature yet. A mature bed can produce nukazuke in as little as five hours but generally take about a day and are ready to serve as soon as the excess nukadoko is wiped of with a moistened paper towel.

Nukazuke is a Gift That Keeps Giving

Keeping a fermentation bed healthy does require daily aeration so if you need to be away for an extended period of time hand it over to a trusted friend. If this is not a possibility, and you can’t take it with you, there is the option of putting it into hibernation. You can refrigerate it after covering the surface with a centimeter each of mustard powder and salt, but this can be harmful if repeated to often. The mustard powder and salt will need to be removed before reviving the nukadoko with new starter vegetables and beginning the aeration process again.

Nukadoko if taken care of properly can last for generations, and like a friendship bread can be portioned of and used by friends and family to start their own fermentation beds making it a thoughtful gift that will take on a whole new life for someone else. 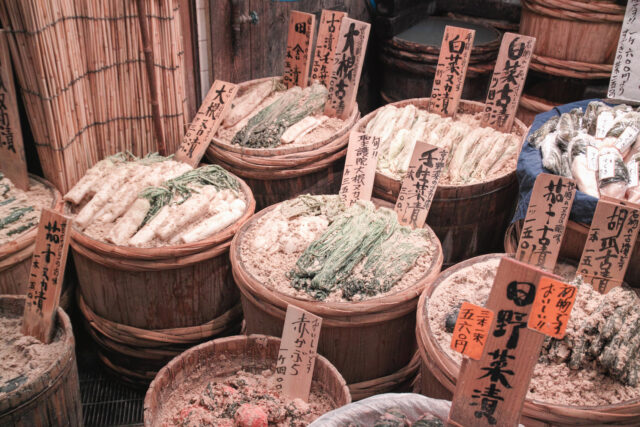 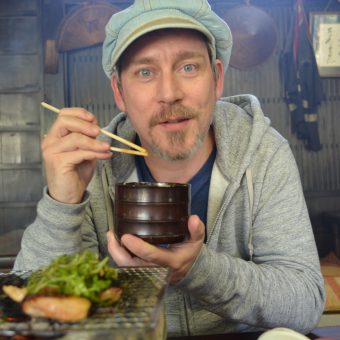