A bit while ago, I managed to squeeze myself into this workshop that fills up in a blink. It was held in a “Kyoto Moyashi House” in Kyoto, the 120 years old traditional Japanese house in Kyoto that used to function as Moyashi (seed Koji) studio.

Needless to say that the house has an old Koji Muro (incubation room), which Akihiko Sukeno, the head of 300 years old Koji maker Hishiroku and the navigator of this workshop, brought it back to life when he hosted the same workshop last year.

The workshop was full house with 30 excited participants. A Tofu maker, a farmer, a French chef, a vinegar maker, a Shoyu maker and Sake maker… people with different backgrounds, but with a same enthusiasm wanting to know more about Koji. The atmosphere was intense as this was such a rare occasion that we could learn Koji making from the professional.

To begin with, Akihiko said “So let’s first get Koji out from Muro (incubation room)!”.

He had already prepared 200kg of 10% polished Nihon-maru rice from Shiga, washed and soaked, drained for one hour prior to steaming then inoculated 10g of seed Koji so we could start from “Kirikaeshi”, the first mixing of the Koji rice.
The rice was wrapped in two layers: the chemical fibre Tetron for the first layer and cotton for the second layer. This is to avoid condensation on rice itself. The double layers help achieving the perfect texture of steamed rice. Tetron keeps the adequate moisture, and the cotton soaks up the excessive water. If using cotton only, it will soak up water too much he said. 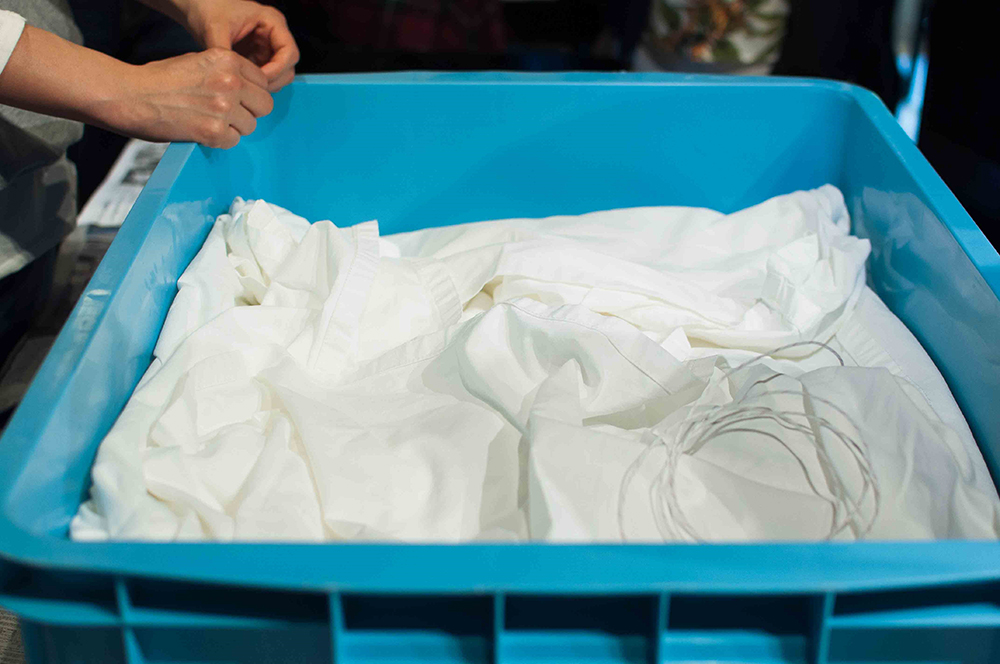 After taking the steamed rice out of the incubation room, we broke them apart by mixing in a container. This is called “Kiri-kaeshi”, the first mixing of rice. The key point here is to make the temperature and humidity of the rice at the edge and those in the centre consistent. The participants all touched the rice in order to feel the texture and the temp. 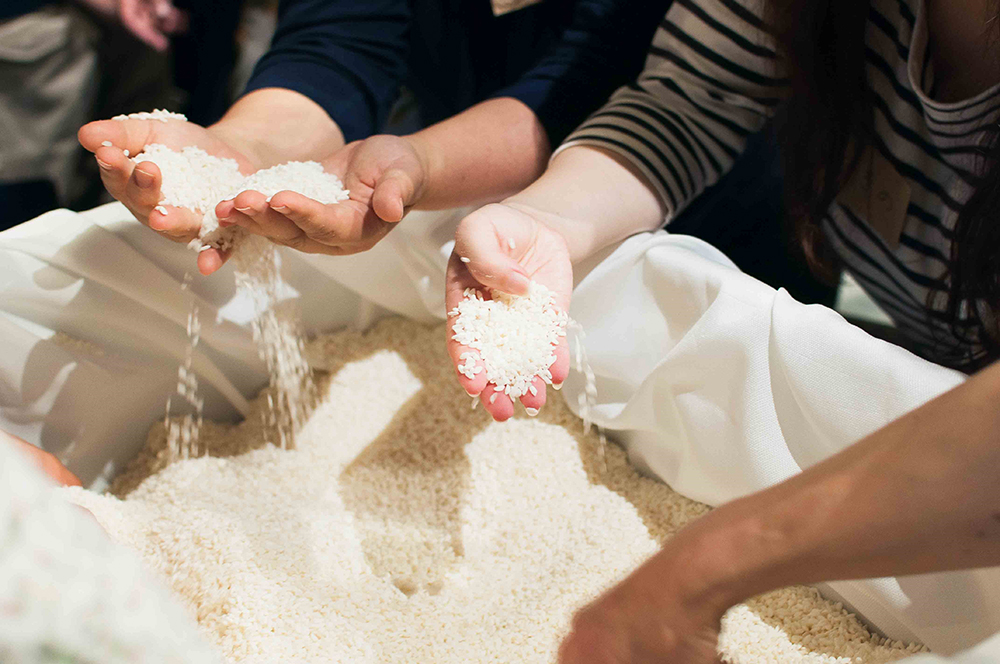 “It’s either the rice gets dried out or mould grows first.”

Aspergillus oryzae, aka Koji-kin, has a favourite humidity range of 36 to 38%. Akihiro encourages people saying that this can be achieved by simply washing rice and soak it overnight to steam. The range is too low for the Natto bacteria. They also prefer higher temperature than what’s normally required for rice Koji making.

Not to mention Akihiko normally makes rice Koji in bulk at Hishiroku, but he also does make a small batch on occasion for test purpose. For that, he uses 2 to 3 times the standard amount of seed Koji and sets up the room temperature of 35 degrees that allows the rice to stay warm between 32 to 33 degrees. If the rice gets dried out, no mould would grow. The temperature and humidity control at this initial stage has a strong impact on the growth of hyphae.

Based on this, he advices us to use extra amount of seed Koji when making it from 500g of rice (measured raw) with cotton cloth. Particularly in winter, the temperature tends to drop very fast so you could also start inoculating seed Koji at 45 degrees even and there is no need of spreading the rice too much (even though it’s suggested so often on the media). For steaming the rice, this time he took 40 minutes from the point the steam got through the layer of rice.

“Do not judge the timing of “Mori” (transferring Koji rice onto a tray) by the clock.”

After about 4 hours from “Kiri-kaeshi”, we transfer the rice from the container to a tray. This step is called “Mori”, and Akihiko suggests not to decide this timing by looking at a clock. Important is to check the temperature and the condition of rice, and to be careful not to do “Mori” too early. Another tip is to boost the proliferation of mould in the early stage when making Koji from a small amount of rice (500g). Again, using the extra amount of seed Koji would help this.

Every industry has its own way of making Koji. For example, Sake industry uses the rice best fit for Sake making that can retain moisture in relatively dry environment. This is to help hyphae to grow into the centre of the grain, which produces the enzyme called Glucoamylase that degrade starch and produces glucose.

In case of Shoyu industry, Umami flavour is considered to be more important than sweetness. This can be achieved in rather colder environment under 30 degrees, suitable for proteolytic enzyme to grow. Another reason to make Shoyu Koji in the colder environment is to avoid Natto bacteria to dominate the culture media. Soybeans retain more moisture than rice grain, and this also creates the favourable environment for Natto bacteria.
With a wry grin Akihiko shared his own experience of 3 months’ marathon of making Natto against his intention when experimenting at Tokyo University of Agriculture.

Each one of us gets a Koji tray to spread rice

Now we actually spread rice on a wooden tray. First form the small hill in the centre of the tray, and draw lines on rice to increase surface to release heat. 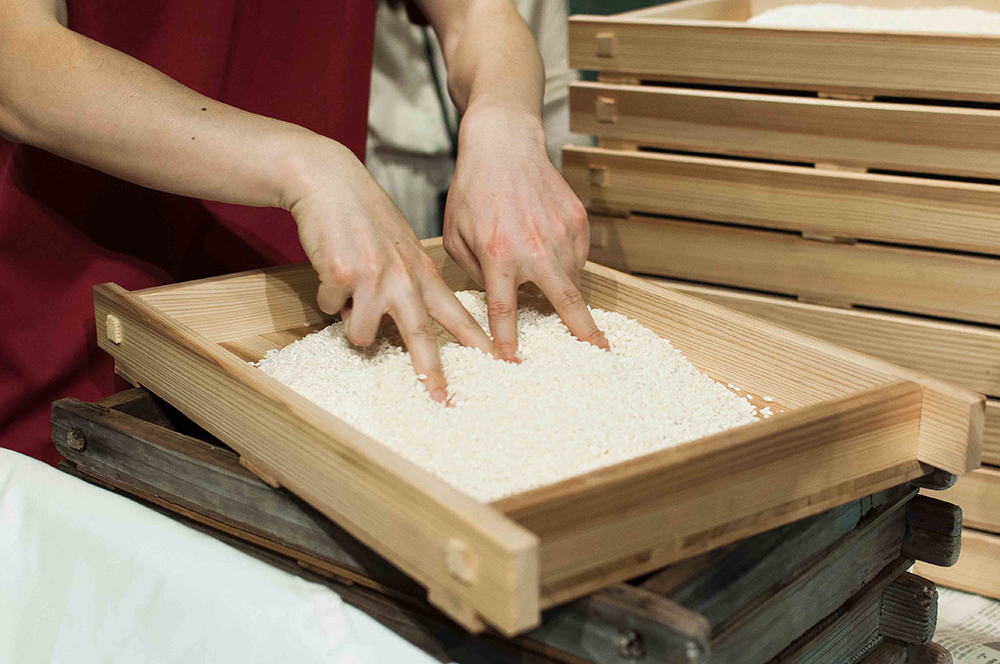 This is the Hishiroku style of lines

After that, we cover the tray with another tray. Then we bring them to the incubation room and line them up in order so it can keep retain stable heat. 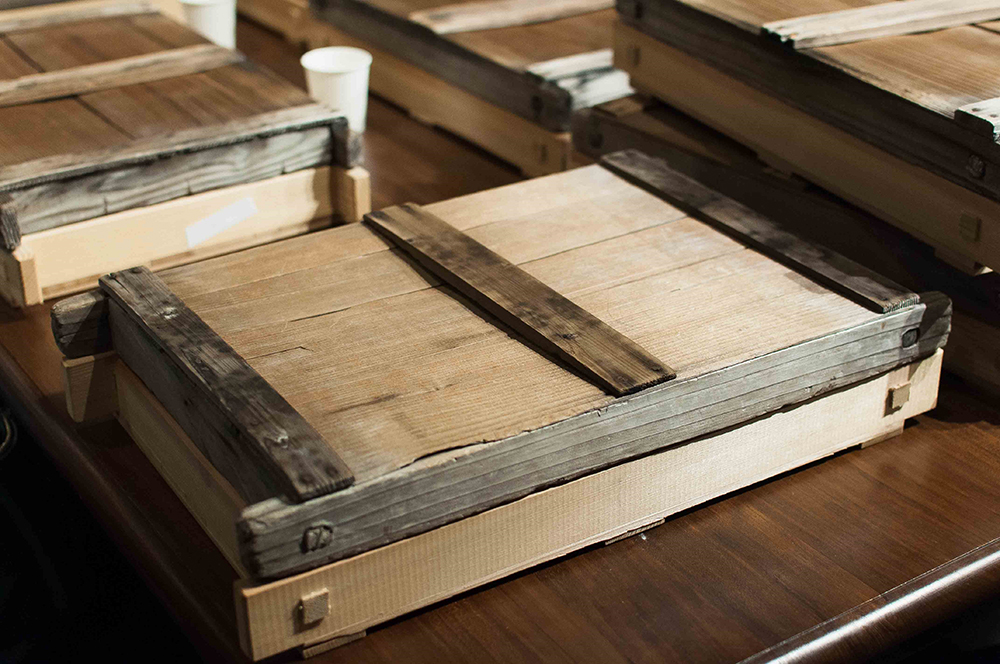 Now Koji can be rested in the room for a while. It’s time for Akihiko to take us further into his expertise. Here are a couple of things he shared with us.

What is “chewed Sake” in Nara period?

Have you ever heard of “Kuchi-Kami-Sake”? It literally means chewed Sake and is the oldest Sake stated in Osumi no Kuni Fudoki, the topography of Osumi Province.

You might recall your experience chewing rice for a long time and it start tasting sweet in your mouth. That’s a same principle.

What’s happening is that diastatic enzyme called amylase in saliva is turning starch into glucose and by spitting the chewed rice into a container to let it further ferment with help of wild yeast, they could make alcohol. (The extra funny anecdote is that it had to be young women who made this work.)
It sorts of make sense that the fact that the Japanese word “Kamosu” (which means to ferment) also derives from the word “Kamusu” which means to chew after hearing this story.

It all started from mould on rice

Sake making from Koji is first implied in Harima-Fudoki (713). In the document there is the line saying “we dedicated a bowl of rice to the God and that got mouldy. We made Sake out of it and threw a drinking party.”. From this we could assume that this was the beginning of Koji based Sake making. 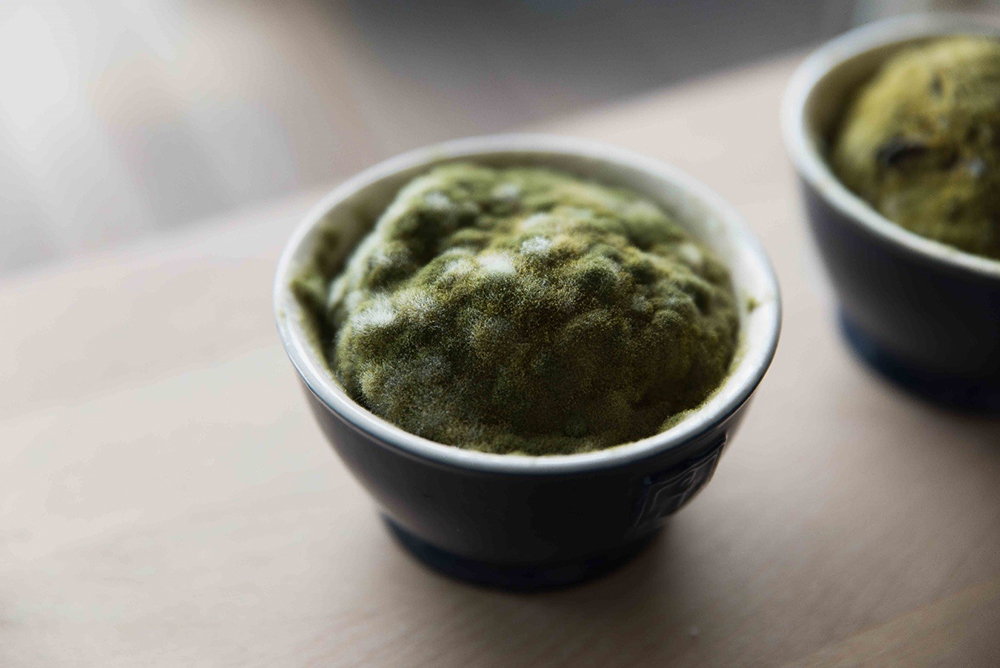 It is considered that Koji-kin or Aspergillus oryzae made its way to Japan together with rice cultivation, but in China Mochi (rice cake)-Koji made with Rhizopus or Mucor cultured on wheat cake is used whereas steamed rice Koji made with Aspergillus oryzae has been the mainstream in Japan. This was due to the environmental difference: the wet land for A. Oryzae and the dry land for the other two.

The first Koji making instruction is stated in Engi-shiki, a book about laws and customs in Heian period. However, the quality of Koji was presumably bad because of their instant method multiplying Koji from the previous batch, instead of keeping up the quality of “mother” seed Koji for every batch.

By the beginning of Muromachi period, there were more than 300 Sake makers in Kyoto. The Koji makers acquired a status called Jin-nin at Koji-za, the guild to holding the exclusive rights to make and sell Koji. This lead to a big conflict with some Sake makers that started making Koji on their own, but the feudal government destroyed their Koji incubation room at Koji-za’s request, and this incident led to a huge Koji riot in 1444, resulting the authority of Koji-za to burn down themselves in fight.

About Koji-kina and how and why Hishiroku blends different strains 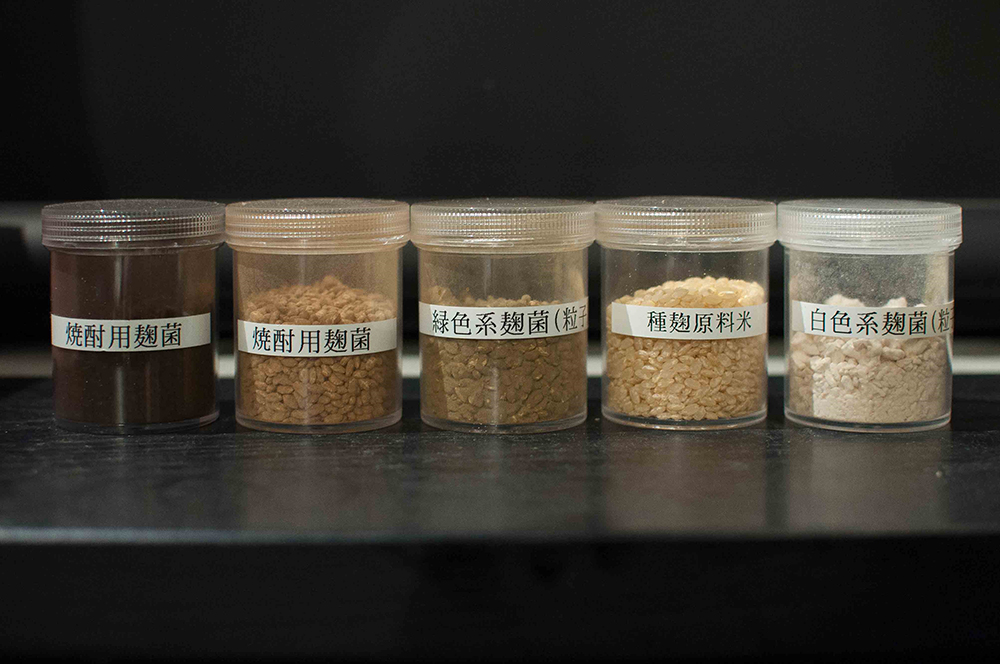 There is something that Akihiko pays extra attention when making seed Koji: do not blend different strains from the beginning.

When making seed Koji for Sake for example, it needs to produce a lot of Glucoamylase and sweet aroma but it is not the case that one strain has all that required properties. That’s why Hishiroku normally blends more than two strains to meet the clients’ expectation, and Akihiko can choose whether to blend them at incubation stage or blend two seed Koji when both at the end.
The choice he made is the latter one. From his experience, he believes that blending two strains wouldn’t promise the same balance all the way till the end. To avoid this, he cultivates strains separately and blend them afterwards.
I was quite impressed with how much Akihiko disclose the secret of Hishiroku style of Koji making to us in details.

His workshop still continues to the next article. Stay tuned for what happens in the next 36 hours!