So this is a second and final article about this special workshop organized by Kyoto Moyashi House, inviting Akihiko Sukeno, the head of 300 years old Koji maker in Kyoto to share his expertise in Koji making. The venue used to function as a Koji studio, and Akihiro infused breath into its 120 years old incubation room at the same workshop last year. This is an intensive crash course that took place at the end of April this year.

Microorganism used for brewing can be roughly divided into two groups: fungus and bacteria. Koji-kin is a type of fungus, just like Sake, Shochu, Wine, Miso and Shoyu, and blue mold, Monascus Anka, Mucor, Rhizopus, and some Japanese mushrooms like Matsutake, Enoki, Shimeji etc.
As you may know, Lactic acid bacterium, acetic acid bacterium and Natto bacteria belong to bacteria family.

Akihiko says, “Fermentation means human’s activity making food with help of microorganisms and enzyme they produce. That’s what I learned from Mr. Takeo Koizumi (a former professor at Tokyo University of Agriculture) too. On the media, they say a lot of things these days, such as the lactobacillus comes into your body and help intestinal bacteria etc. In fact, it’s enzyme and vitamins produced that are doing the job. It’s not like Koji-kin increased to make Amazake or Shio-Koji. Koji-kin doesn’t survive in water and is supposed to pass the torch to the yeast in the fermentation process.”

Koji-kin simply produces enzyme to live and pass the life to the next generation. Fermentation is a merely a gift that we human is benefiting from that process.

Akihiko mentioned that Koji-kin can adopt to the given environment. When it’s cultured on liquid, they would seek for oxygen and grow on the surface of the liquid. On the other hand, they would feed on solid culture by producing degradative enzyme. In the latter environment, gene that produce a lot of Glucoamylase would develop. Rice is ranked as top culture media for this, barley the next and soybeans the last. The descending order for Protease is a complete opposite of this.

In Koji-kin family, there is also one that produces toxic agent such as Mycotoxin.

“Sometimes I have a visitor with “Koji-kin” cultured from wild, but I can’t help asking whether they sent it to a laboratory. There was actually a case of Turkey X, you know.” says Akihiko.

Turkey X disease is a well-known incident from 1960s in UK. More than 100,000 turkeys died after eating peanut meal that was contaminated by Mycotoxins produced by Aspergillus flavus. The toxin found was named Aflatoxin (toxin from A. flavus), and brought panic to Japan since a lot of fermented food used the same Aspergillus mold in the country. Luckily, no toxic agent was found from the investigation.

“Another “attractive” toxic agent called Ochratoxin produces rather extra citric acid and strong diastatic power temporarily, but still it cannot be used as Koji-kin due to its toxic property. A bit same as mushroom, right? Not everything is safe. Currently all the commercially available Aspergillus is properly verified though.” 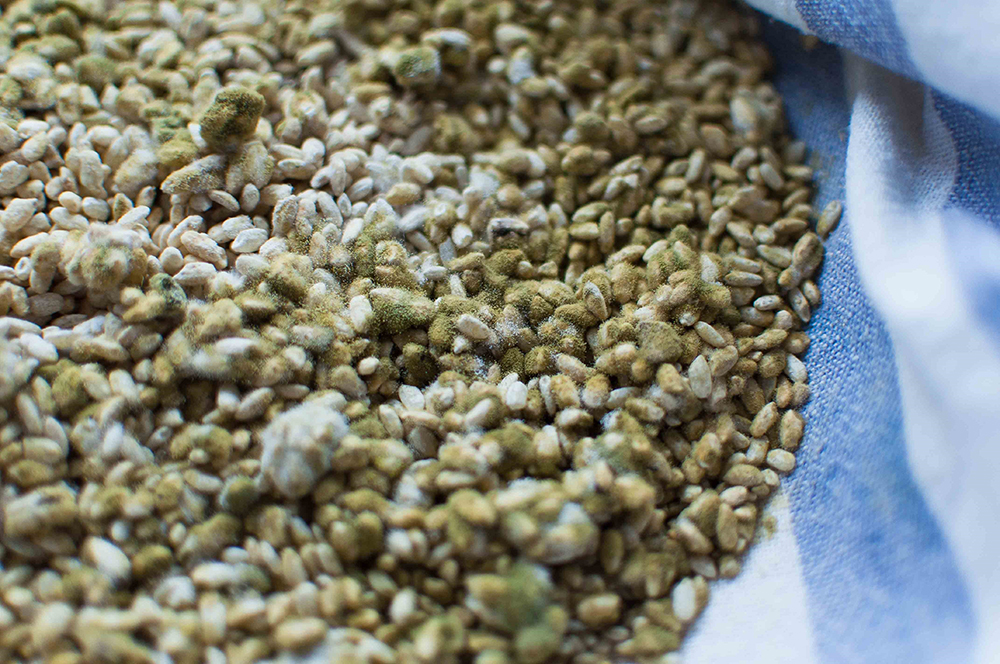 “As a Tane-Koji maker, I need to collect spores efficiently. So my method is different from the standard Koji making like what we are doing here. To collect spores, I would have spread rice thinner like 5mm thick. Otherwise the temperature of rice would jump up and makes it difficult for spores to grow. The Koji that got “burned” would stay white and no spores would grow there.”

Akihiko finishes making Koji for Sake in Spring, to be fully prepared for Autumn when Sake makers actively start making Sake.
This is to make sure providing best and most fresh quality seed Koji to them, as Sake makers use relatively less of it (e.g. 10g granulous seed Koji per 100kg of Daiginjo Sake rice) and it is crucial to use the best quality. Another potential risk is that it would disturb the aroma of Sake if there are too much Koji-kin grown as Koji would hold too much fat inside.
Akihiko also needs to make sure that Koji-kin needs to grow in the kernel of rice, which is very important for Sake Koji.

At Hishiroku, they polish only 3% of brown rice so it keeps some nutrients like bran. In the process, they would also use wood ash (particularly of camellia, oak, Tochi and Nara tree that has high alkali level and pH level of 12-13) to create phosphorus and potassium rich environment to make it inaccessible for other unwanted bacteria.
This would also help Koji-kin to change its character to create more spores, which means aerial mycelia become shorter. The shorter the aerial mycelium is, the faster the spore grows. 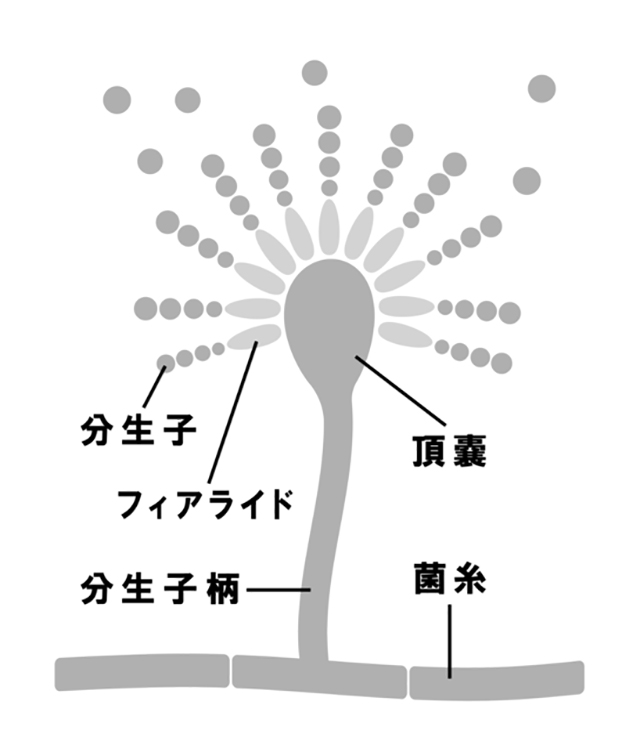 The original strains at Hishiroku has been strictly handed down through generations but of course they do have a sort of “best-before date”. So Akihiko makes sure that the quality is sustained by culturing new strains based on the original, constantly checking the amount of enzymes produced and visual look of it.
This task is extremely important at Hishiroku, as only sometimes A. oryzae suddenly does not produce spores for some reasons even though it is a strong strain that hardly has mutation.

What’s special about this workshop was that each one of us temporarily gets a Koji tray (a wooden tray specially made for Koji making) to take care of the whole process of mixing and separating grains.
The tray is made with some tricks: the centre of tray is made thicker than the rest so that Koji rice can be spread extra thinner when we want to release its heat. The centre is also bended a little for the same reason. It makes sense that we dig a shallow hole in the middle of Koji rice in the second 24 hours when temp starts to rise faster. 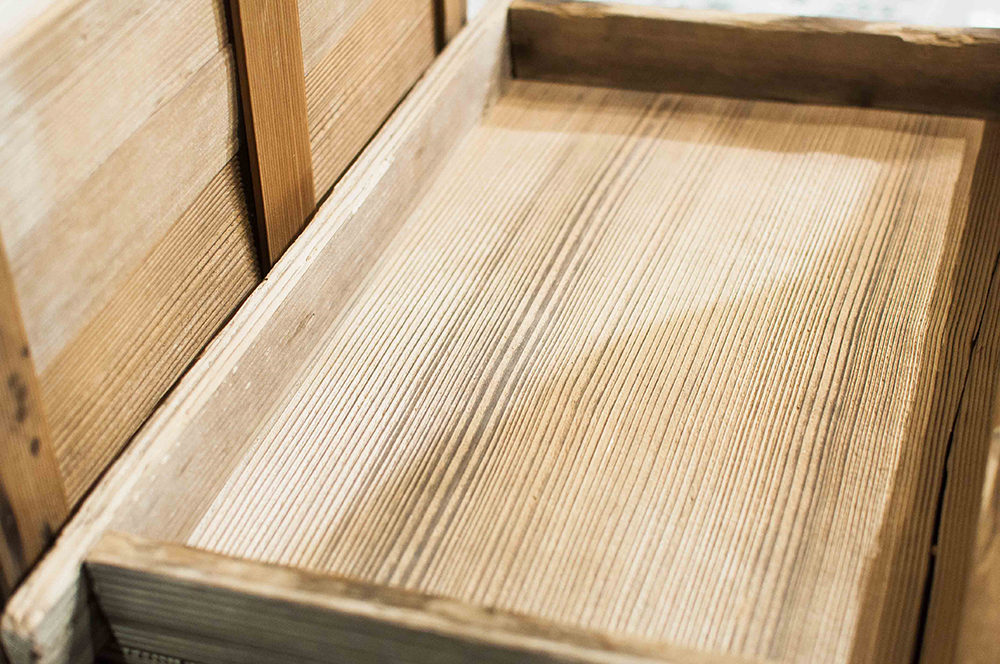 So we have had mouth full of information from Akihiko by now. Finally, the short break is given with some sample drink of “Fermented Koji soy milk”. This was invented at Hishiroku, from a very simple idea of mixing plain soy milk and “Koji powder”. Akihiko knew that many consumers like to mix Amazake and soy milk, which made him wondered “why not mix them from the beginning?”.
For this drink, the ratio he applied was 3 (soymilk): 1 (Koji powder).
“Koji powder” is grinded rice Koji grains, and its making is not very simple. A normal grinding machine would cause the decrease of enzymes, so Hishiroku use a special machine that uses grindstone.
I tasted both hot and cold version and it was very creamy and deep. Protein-cutting enzyme can work straight in soymilk, so the amount of Amino-acid production is more than Amazake-Koji-Mix. 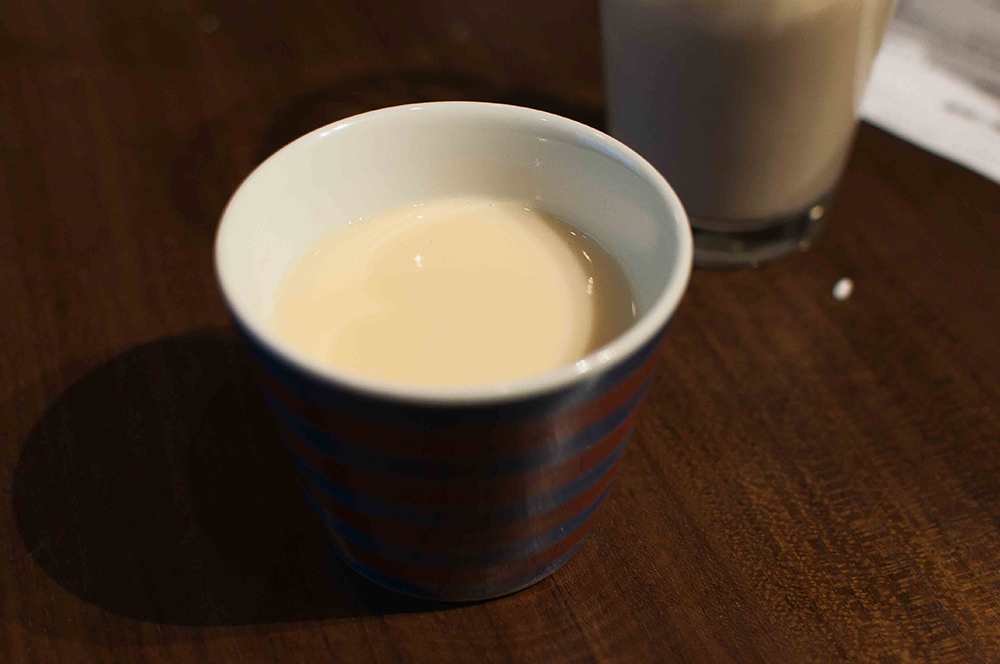 Getting Koji out of the 120 years old incubation room

One the second day of the workshop, we could already get Koji rice out of the Muro (incubation room). We’ve already done all the mixing on the first day, and the rest of the work was done by Koji-kin overnight.
One thing to be mentioned is the way of piling up the Koji trays in the Muro. At the beginning, they were lined up neatly without a space in between, but in later stage they were re-aligned like a brick wall, allowing small gaps for koji to breath and to release some extra heat. If you do this from the beginning, Koji-kin would have difficulty growing. 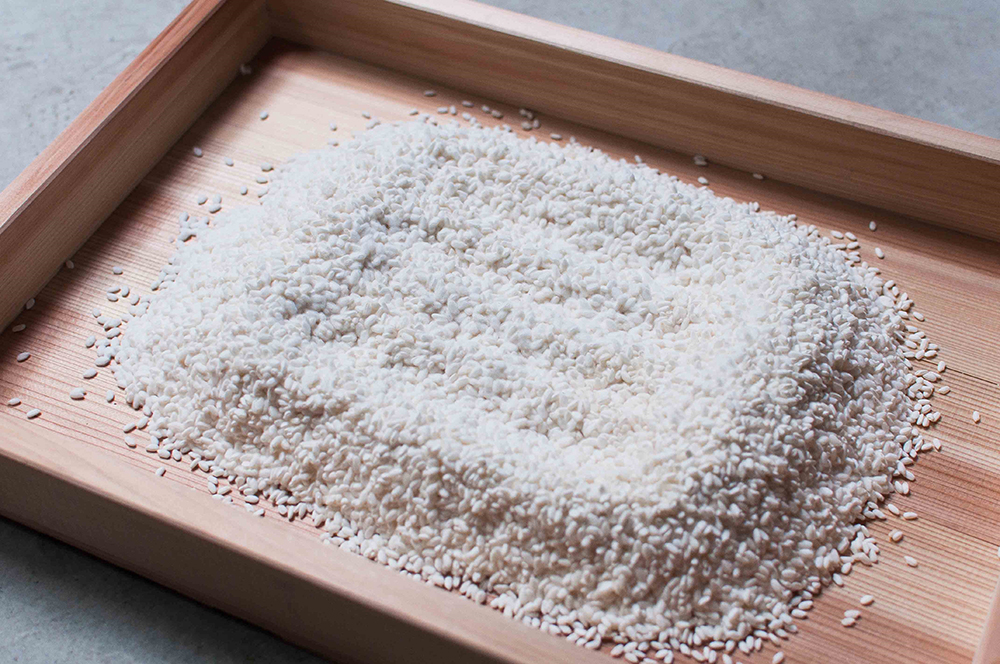 Koji we took out of Muro needs to be divided into 12 portions. If you leave this as one lump, the temperature (particularly in the middle) keeps on rising and Koii eventually burn themselves. Akihiko himself witnessed some steam coming out of forgotten Koji at his company too. 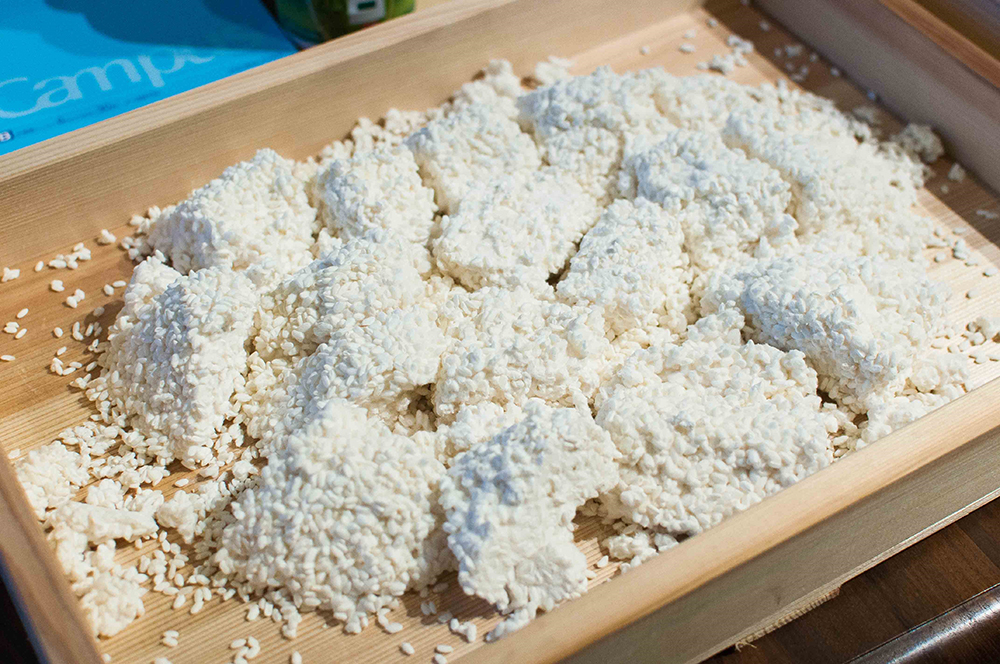 Akihiko explains that it is a bit of stress to do Koji making at different location than his home base. Last year he prepared everything from scratch at Moyashi Machiya: steaming the rice and inoculating Tane Koji. He remembers that it really was a lot of work. This tells us that we need to be familiar with the environment that Koji is incubated. If you do it at home, keep doing it at home.
On the other hand, he also told us that we will win the game if we nail the soaking and steaming the rice, inoculating spores and looking after Koji rice for the first 24 hours from the inoculation.
There are of course tons of “professional” ways of making Koji, but as a Koji maker who supports the base of Washoku Japanese cuisine, Akihiko wants to bring Koji making closer to people.

About Tane-Koji (Koji spores) at Hishiroku

While cooling Koji rice, Akihiko disclosed some more secret (?) about Tane-Koji that Hishiroku offers.
Tane-Koji, normally refers to spores of Koji-kin. However, spores themselves are weightless so it would float in the air instead of landing on the target. Standard home brewers do not have a professional Koji making facilities that can inoculate spores on the grains efficiently, but Hishiroku has the solution for it.
After collecting spores, Hishiroku grinds the rice grains into powder. So 90g of 100g bag Tane Koji is this grinded Koji rice powder, and the rest 10g is spores. This way, extra weight is added to the spores and they can fall straight down onto the target (rice grains). Now I know why my Koji made from Hishiroku Tane Koji always works perfect…

I’m wrapping up my article about this workshop here as there are far too many stories he shared. Akihiko is throwing another workshop at the same location in September. Why not taking a part of it? You’ll learn way more than Koji making, everything about enzyme and all.