Mrs. Marika Groen is a fermented Cooking expert who also loves microorganisms and a photographer. Mrs. Marika living in Amsterdam is engaged in activities to bridge the world and Japan through fermentation culture and so on. For this time, Marika will introduce about TOKONAME crock which will continue to be loved as a container for fermented food. 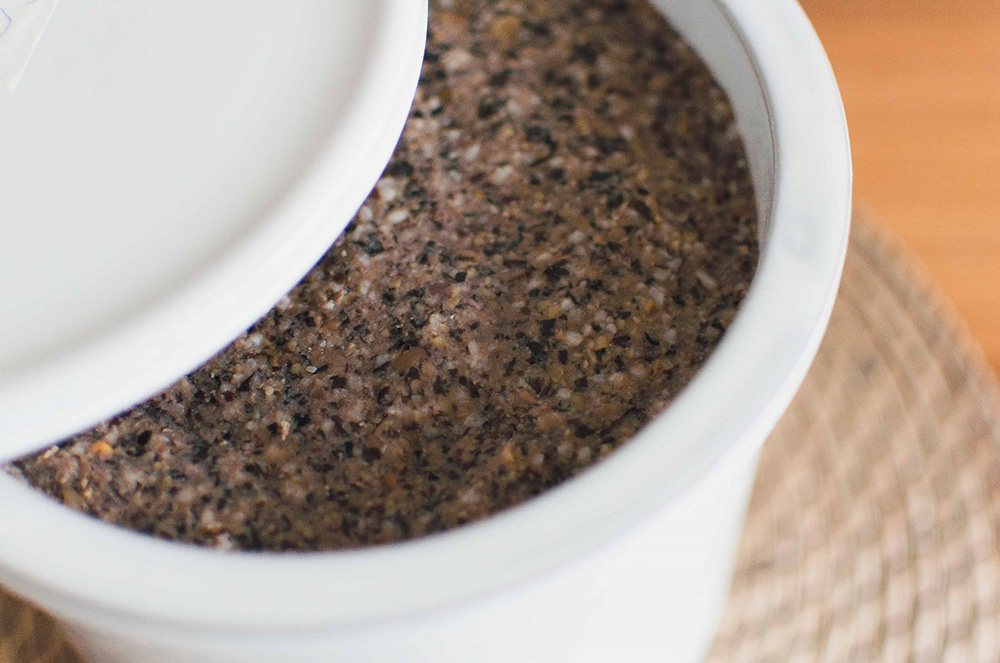 Tokoname ware is one of Six Ancient Kilns in Japan, produced in and around Tokoname, Aichi prefecture.
Over 900 years of history in its quality material and its manufacturing method, Tokoname crocks have been captivating a nation, for various fermented or preserved food making.
In the last decades, however, the Tokoname potteries have been facing the reality of falling demand after a period of high economic growth. Many potteries stopped the production and Tokoname crocks disappeared from the market.
In such challenging circumstances, there is a dedicated pottery that has been making the same Tokoname crock for 50 years since its establishment. That is Yamagen Pottery, located in Tokoname city, the west side of Chita-peninsula overlooking Ise bay.
Yamagen Pottery has not only upheld the traditional Tokoname ware, but also made an innovative approach to ‘update the tradition”.
I’d like to share my report on a collaboration event with Yuji Koie, the third-generation of Yamagen Pottery, and also the initiator of this TOKONAME project with his new crocks and “tea family”.

In February this year, there was the second edition of MONO JAPAN, a yearly Japanese craft and design fair in Amsterdam. I was hosting Washoku (Japanese cuisine) workshops in a collaboration with Takumi Craftworks, who was showcasing the tea ware from Yamagen Pottery at the fair. This tea ware, is of course made of Tokoname clay and was the first product line of Yuji’s TOKONAME project (which I explain in below paragraph).
I met Yuji during my workshop when I was demonstrating some basic Japanese cuisine using traditional cookware and tableware that Takumi Craftworks were presenting. To serve tea to the attendee, we used these cute tea cups and a tea pot from Yuji, which happened to be the first time for me to touch the modern finish of Tokoname pottery. 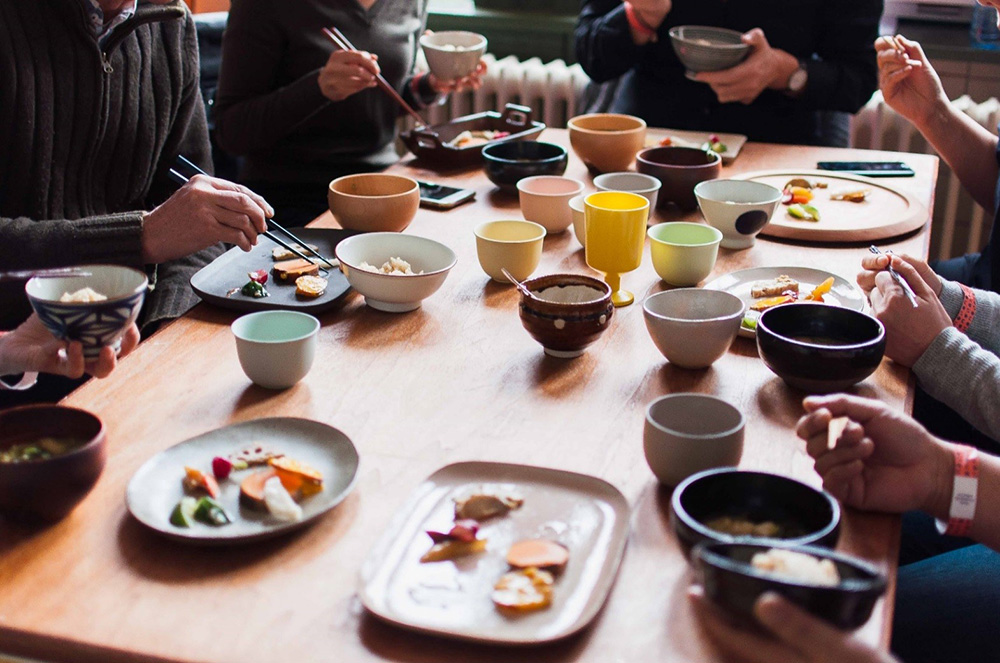 The fair lasted three days, and I had some time to enjoy the exhibition myself.
One day in our exhibition room, I noticed that there was an unusual white crock standing alone in the corner. The minimalistic design drew my attention and I fell in love with it instantly. This was the TOKONAME crock. It wasn’t there for sale, as Yuji brought it just as a sample to see people’s reaction. We had some chat about this crock and I soon discovered that it was perfect for making Miso and other fermented food.

Why is it so good for fermentation? 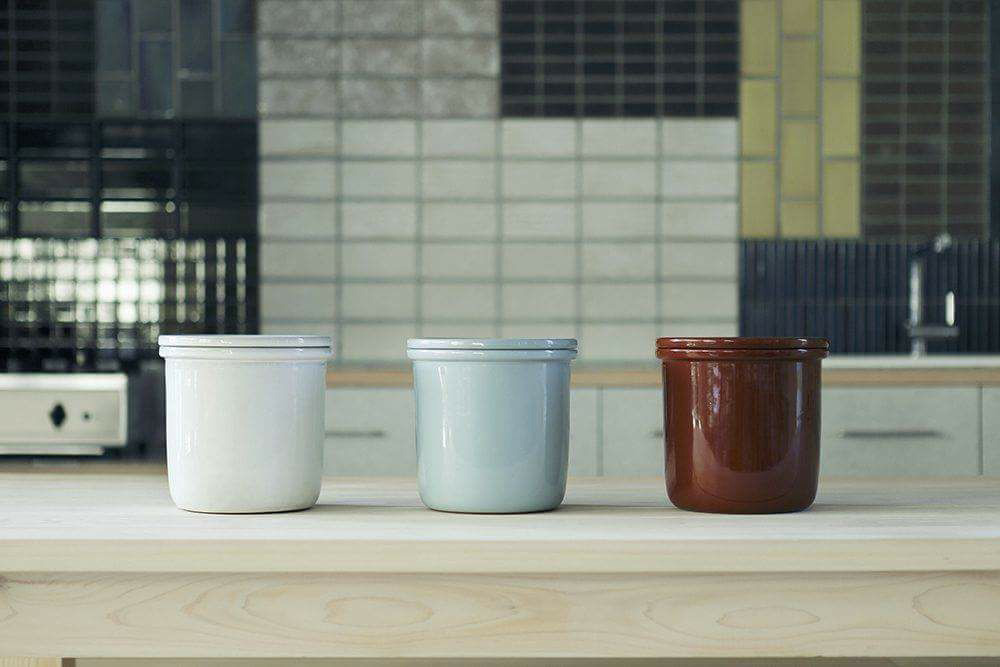 Apart from the fact that it has a beautiful shine and chic colour, the size of 3.7 litre content (4.5 in full capacity) was just what I needed for home-size fermentation. The design is so simple and more fitting to our modern kitchen, and on the top of that, there are some technical aspects to convince you why this crock is so perfect for fermentation. No, she’s not just a pretty face.

The crock is best fitted for fermenting food because:
– it is glazed without chemicals, which is most important to store food. The glaze also blocks the unwanted mold from lactic acid bacterium and saccharomycete.
– the thermal conductivity is low. It holds the temperature constant, which protects the ferment from sudden temperature change.
– it is acid and salt resistant, which is handy for making Tsukemono, Miso, Umeboshi, Nuka duke etc.

It is made of purely local Tokoname red clay (high clay content) that brings the high density, and is glazed without hormone-disrupting chemicals.
The biscuit firing at 750 degrees, then slowly up to 1200 degrees in the next 8 hours for completion. This makes the finish very dense.

Back in February I made black beans Miso in this crock, and it came out so good in Autumn. It was easy, and I made another batch of Miso in it immediately. The crock has been standing in my living room the whole time, drawing a lot of attention from my visitors. Quite a few people asked where they could find this.
I told about it to Yuji when I visited Tokoname this spring, and it was instantly decided that we would host Miso workshop in coming winter. We asked Takumi Craftworks to take care of the import in Netherlands, and everything went swimmingly.

Yuji’s TOKONAME project is meant to revitalize the old Tokoname ware by changing the format of sales and the way of presentation. Himself is a potter, and he focuses on communicating with users directly, rather than letting a wholesaler distribute his products. This way, he believes that he can deliver the message from craftsman to users and have a better understanding of what Tokoname ware really is. So it was natural for me to be a story teller after becoming a user of this crock and visiting his pottery to truly understand his concept. 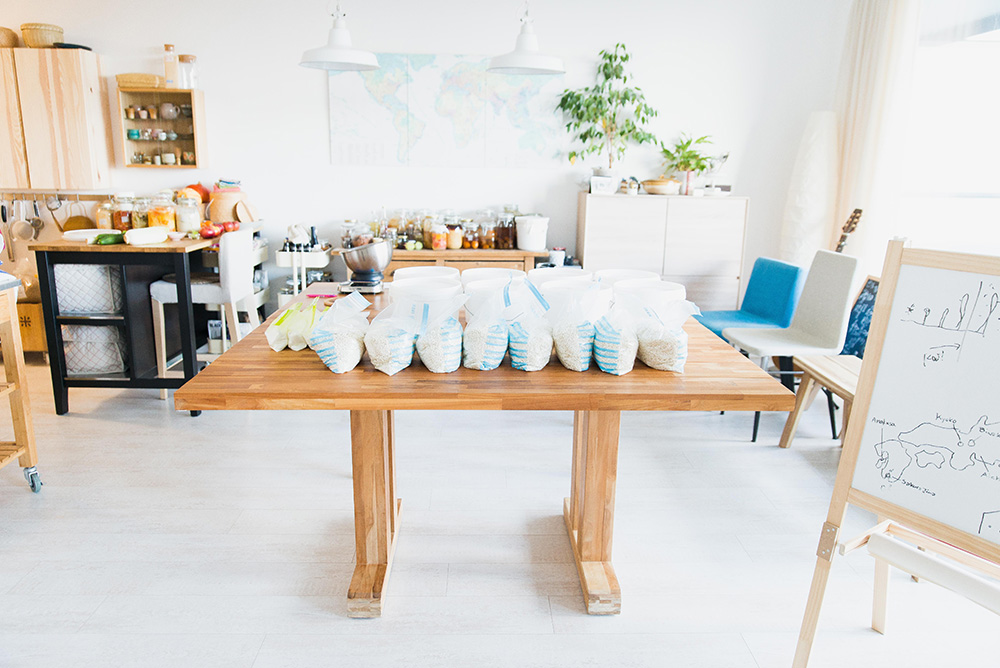 On 26th of November, we hosted the workshop at my fermentation room Malicafe Organic Vegan Food in Amsterdam. Mostly Japanese people from Netherlands, Germany and Belgium, and a few Dutch chefs participated the event.

As usual, first I explained how the Miso is made, about the crucial ingredient Koji, and some types of Miso eaten in Japan with providing some sample tasting. 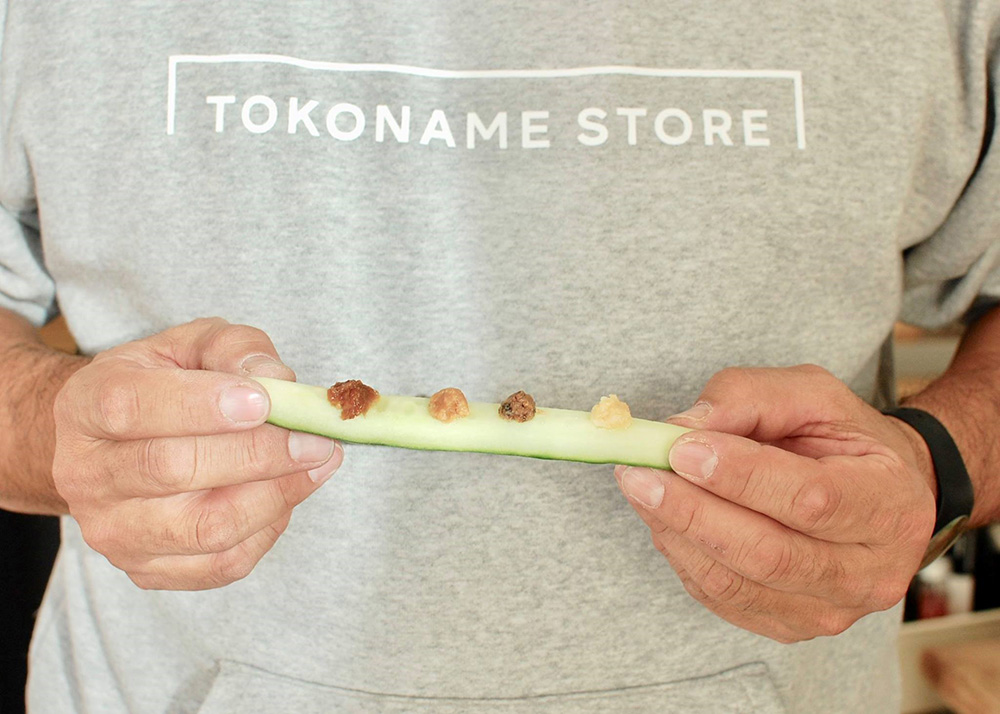 After the lecture, we all made Shio-kiri-Koji, the mixture of salt and Koji, then mashed the cooked organic soy beans with a potato masher in a bucket.
When all beans were mashed, we mixed it with Shio-kiri-Koji, and made Miso balls to push the air out from the mixture. 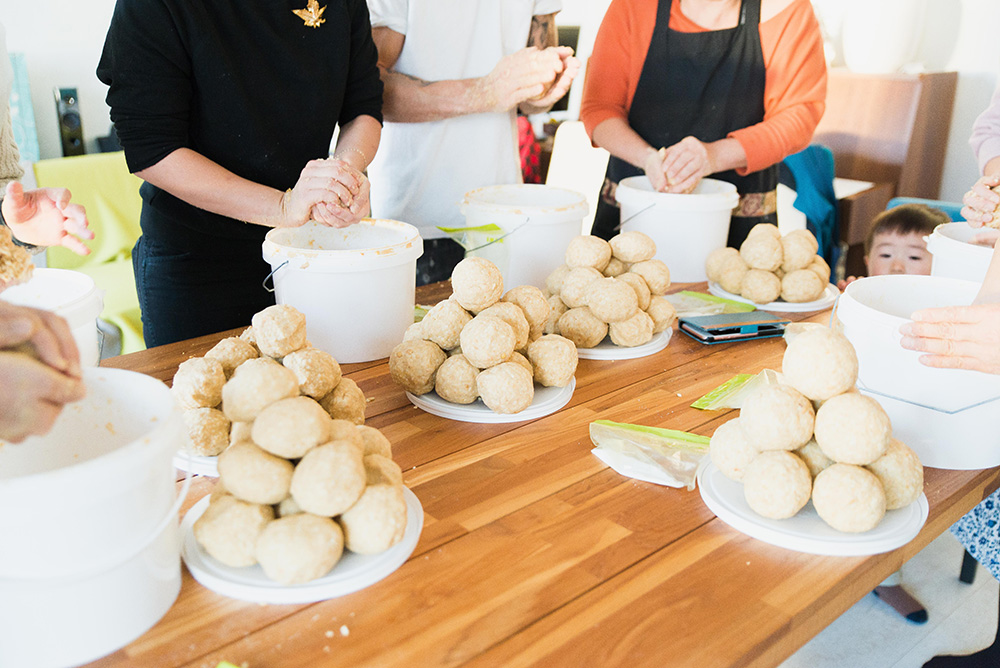 After all the mixture is formed into balls, we threw each one of them into the crock to push them further to achieve zero air between gaps. 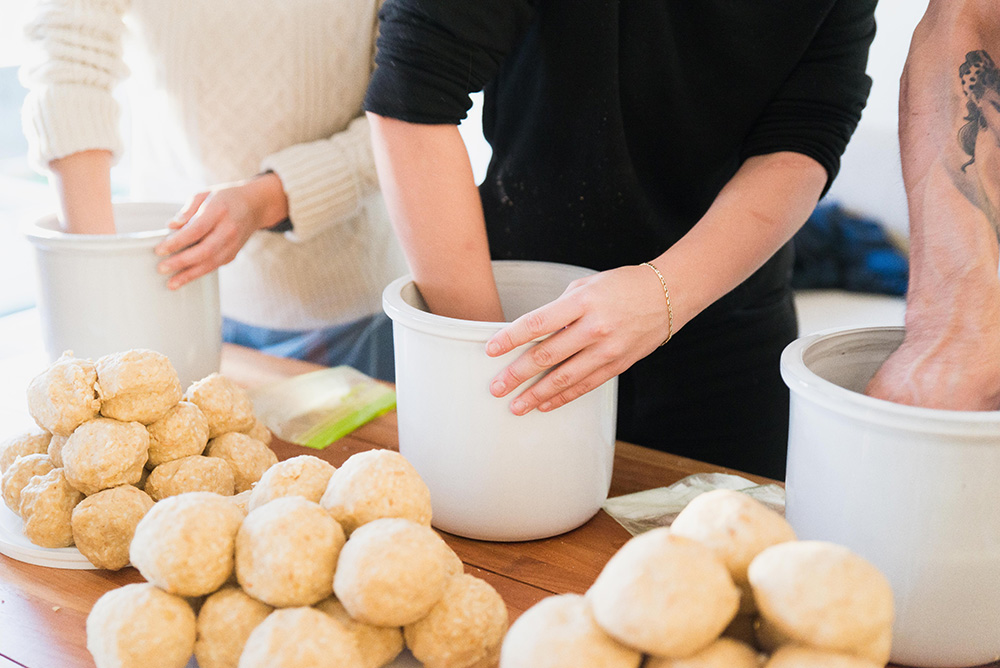 When the crock is filled with the mixture, we flatten the surface and covered it with salt.
Miso we made in this workshop had rather higher rate of Koji over soybeans, so it is supposed to be ready in the short period of time. I instructed everyone to store it in a cold and dark place, and regularly check if there is any unusual mold growing on the top. 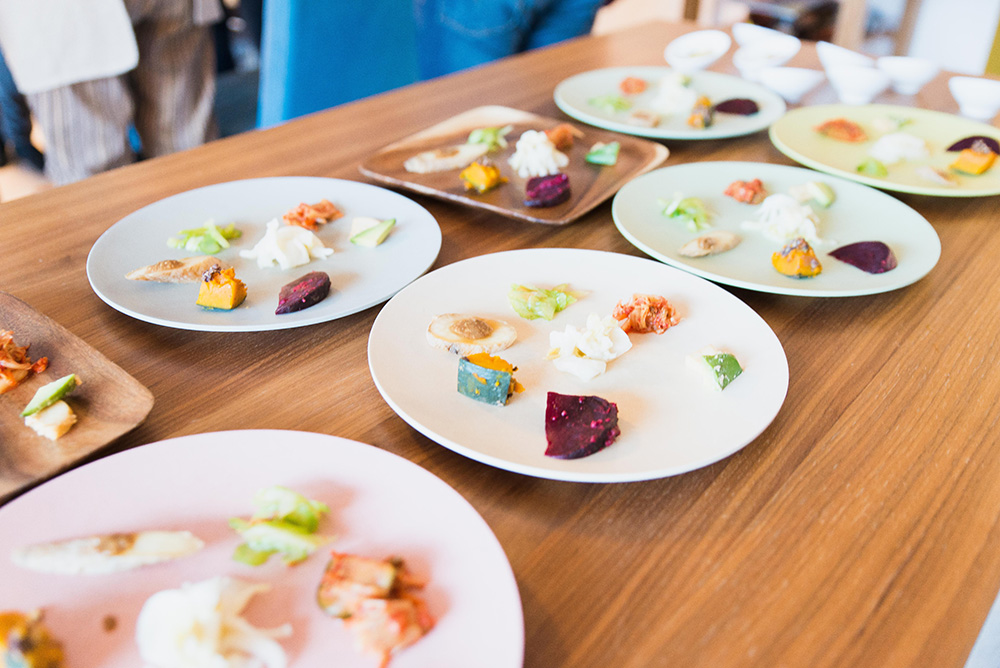 TOKONAME crock as one of your option

All of these fermented foods can be made in this TOKONAME crock, as well as other jars and containers. Just to avoid narrow minded thinking, I’d say that you can just choose what’s best for every occasion. Every tool has pros and cons and it’s all fine to pick the one that is easiest for you, and makes most sense for your fermentation.
For instance, pottery is the best in light and heat shielding, but the enamel also has a smooth and durable vitreous coating, which makes it salt and acid resistant. The weak point is the thermal conduction, but if you intend to store it in a fridge, this option comes very handy.
Glass jars do not block light or heat compare to the pottery, but the best thing about this is that you can see what’s going on inside. It’s the easiest tool for beginners who are afraid of unwanted mold that might be growing in food.
Yuji says, “Just like the other tools, I want this TOKONAME crock to be an ordinary alternative, and not something very special.”

With much empathy, I hope that you have one of these crocks sitting in your kitchen together with other pots and containers, waiting to be used for fermentation one day.

TOKONAME crock can be purchased from the following link.
TOKONAME ONLINE SHOP

Making Koji with a professional Koji maker at a traditional Machiya house in Kyoto (Vol. 1)

The second day of Koji camp with Nakaji in Shiga. A jam packed day learning from the professional temperature control to the rule of fermentation (Vol.2)