If you are into fermentation, you probably already know Nakaji. (If not read further.) From 21st to 23rd of April, one of his routine work “Koji camp with Nakaji” took place in “Masako’s house of herbs” in Takashima, west of Biwako lake in Shiga prefecture. This article is first half of technical notes about professional Koji making as well as my personal diary about meeting new soul mates. 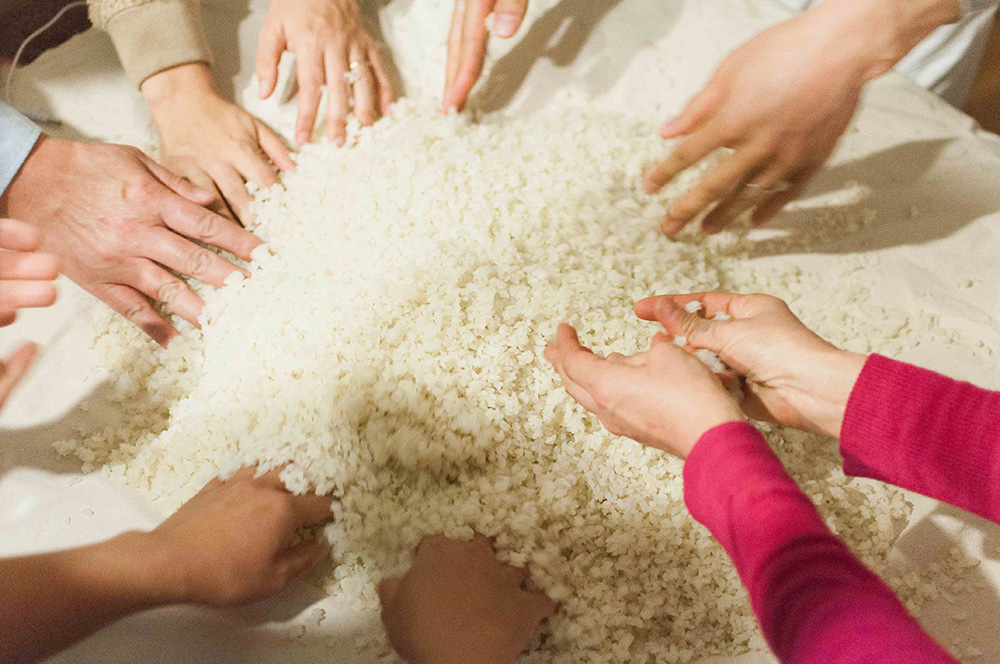 In the morning of 21st of April, I was on JR train travelling to the west side of Biwako, the largest freshwater lake in Japan. The clock of my phone indicated 10:30, one hour later than how I intended to be on this train. For some reasons I overslept this big day – the very first day of 3-day camp called “Nakaji’s Koji school”.

When I arrived at the Adogawa station, I saw a lady standing just out side the ticket gate. Her name is Masako Taya, the owner of “House of herbs” in Takashima that the camp was going to take place. Masako is a cooking expert in fermentation, particularly focusing on fresh local ingredients from Takashima. Through many activities she promotes the culture that has been deeply entrenched in local community in order to revitalize the town. There is almost no one in this town who doesn’t know about her and her team. Her motive and a cheerful character certainly has been making a lot of fans here.
On her car she said to me with smile, “Don’t worry, everyone is just picking some weeds in my garden.” 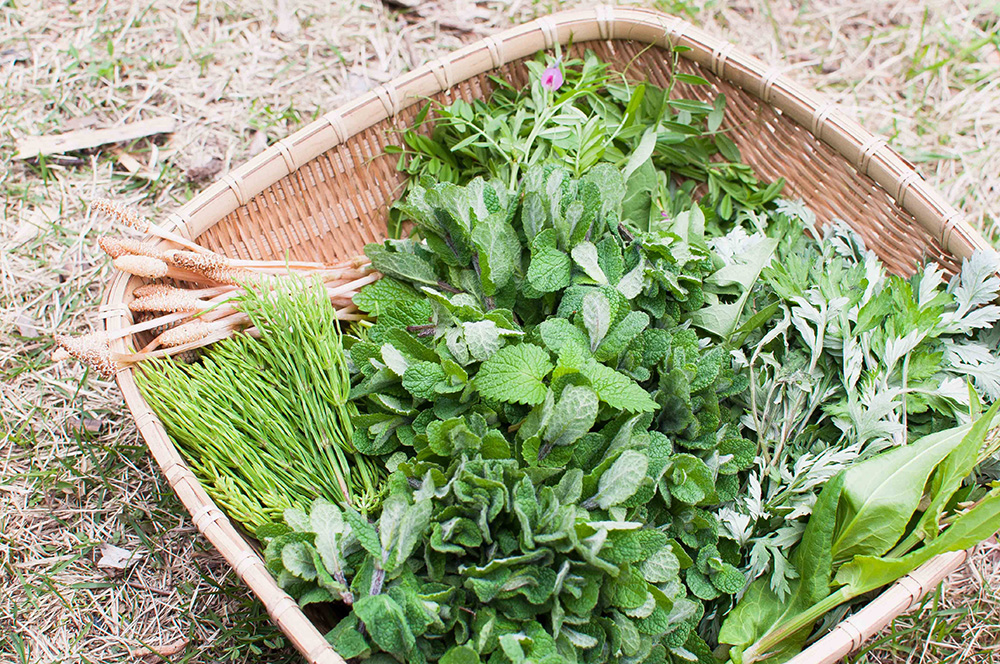 After about 10 minutes ride, the “House of herbs” showed up in front of me. As the name suggests, standing in the middle of weeds and herbs.
Indeed there were bunch of people picking those weeds, chatting and laughing. They all looked relaxed and happy, simply enjoying the time to be together.

In the meantime I recognized a familiar face. The man with a usual flat cap, talking with few participants in a peaceful manner. This was Nakaji, who is a fermentation expert particularly in Koji and Sake making, and also a specialist in exercising to relax body. He spends quite a lot of time to travel around, meeting people who want to learn something from him. In his sessions he also talks about the importance of living in harmony with microbes around us, which helps countless amount of people who seek for some other ways to become healthy or to improve their life styles.

The garden was already filled with a feeling of fullness. The camp kicked off with fermentation lunch cooked with much care by Masako. 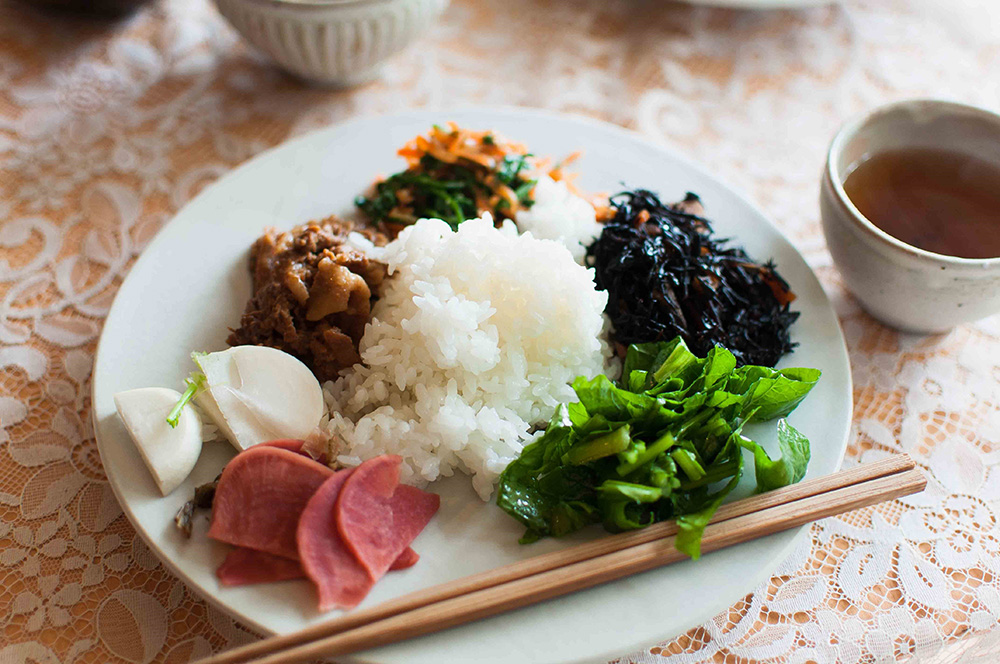 The lunch on this day was Amazake-oriented Miso, special Miso called Hata-chan’s Miso from Takashima, Japanese parsley (that we picked from the garden) and carrot dressed with sesame sauce, fresh organic turnip slice and its leaves massaged with salt, and pickled Yurugi turnip (native variety from Adogawachonishiyurugi).
I could feel Masako’s intention trying to bring fermented food back into everyone’s kitchen, and also to make the local ingredients more known as safe food to eat.

After we were fully recharged with Masako’s lunch, Nakaji begins the Koji lecture. The key to the success is steaming rice to achieve a certain texture. 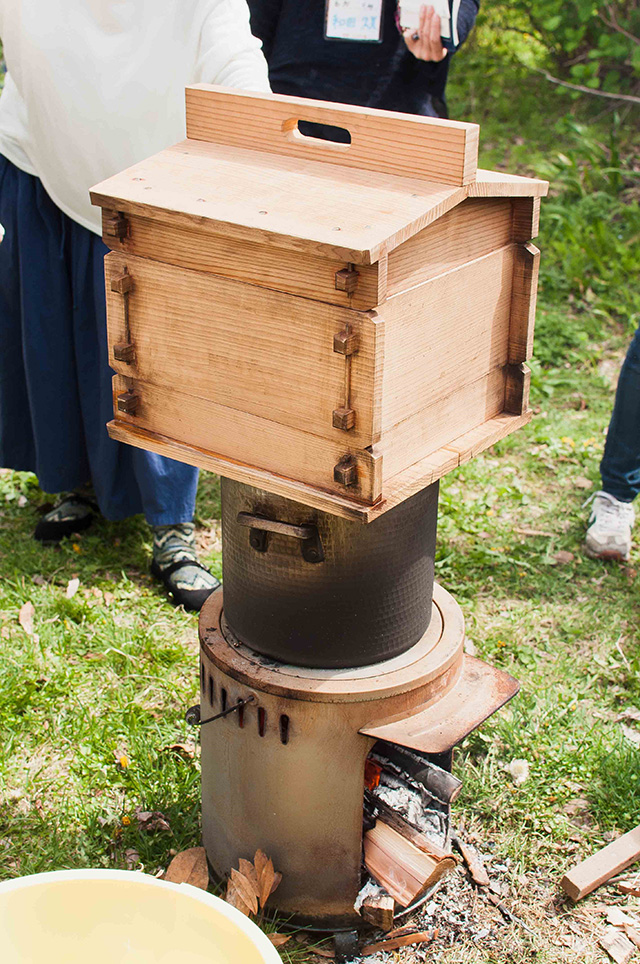 For this lesson, we used 4kg of “Sasanishiki” rice. This had been soaked for 12 hours and drained for 90 minutes prior to steaming.

The classic steamer on fire built with firewood.

Ideal steamed rice has hard texture outside and soft inside to stay non-sticky. Nakaji explained, “You better not to cook rice al dente in boiling water. Steaming would achieve the most optimal texture.”

The steam cloth shouldn’t be wet otherwise the grains would get too sticky due to a lot of moisture.
What drew my attention the most was the way to transfer rice into the steamer. Instead of transferring entire amount at one go, Nakaji added in layers bit by bit, to cover the part of rice that’s been cooked through with steam. This is one of the tricks to avoid mushy rice. 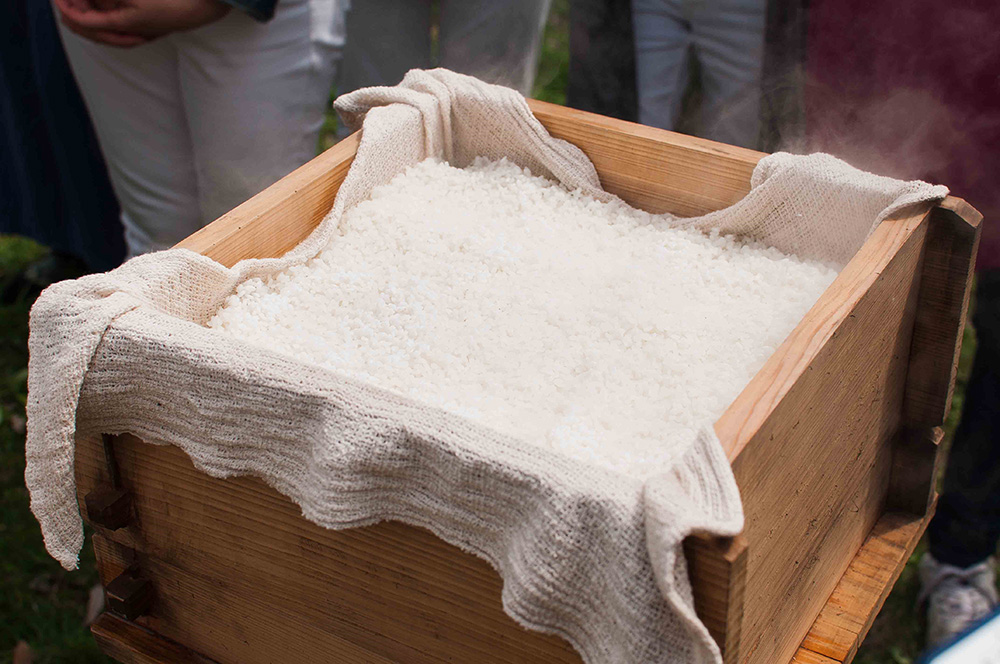 After all the rice was in, he placed the lid and informed us that this would be steamed for about 40 minutes at mid-high fire (about 70%).
This is a standard guideline so some adjustments are needed depending on the condition of rice and your environment such as humidity and temperature.
The best way to check is to squeeze a few grains on your palm to see if you can make a small Mochi. If you feel the core of the grains are undercooked, you can steam it longer until it’s just about done.

The wooden steamer we used this time is perfect for soaking up excessive moisture during the steaming. If you use a metal pan, you may end up with condensation that causes mushy rice. Though there’s always a workaround.

If the rice achieved “hard outside and soft inside” texture, transfer it onto the cloth on a table. This step is called “Mushi-tori”, and we all participants touched the rice to break up the lumps to cool it down to about 40°C. 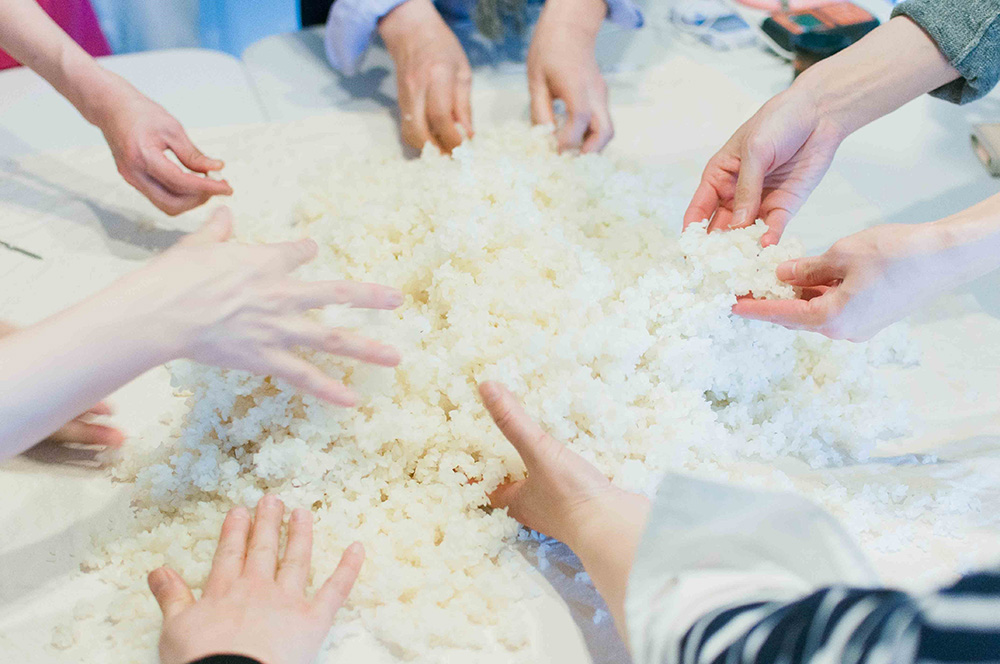 Nakaji used canvas as it soaks up the moisture than cotton. His recommendation was a thick type of Takashima canvas, which can be purchased from Marugoto department store (http://takashima-marugoto.jp/).

Let’s finally inoculate seed Koji on the rice. Make sure to do this on every single grain. Breaking up lumps beforehand would make this very easy. 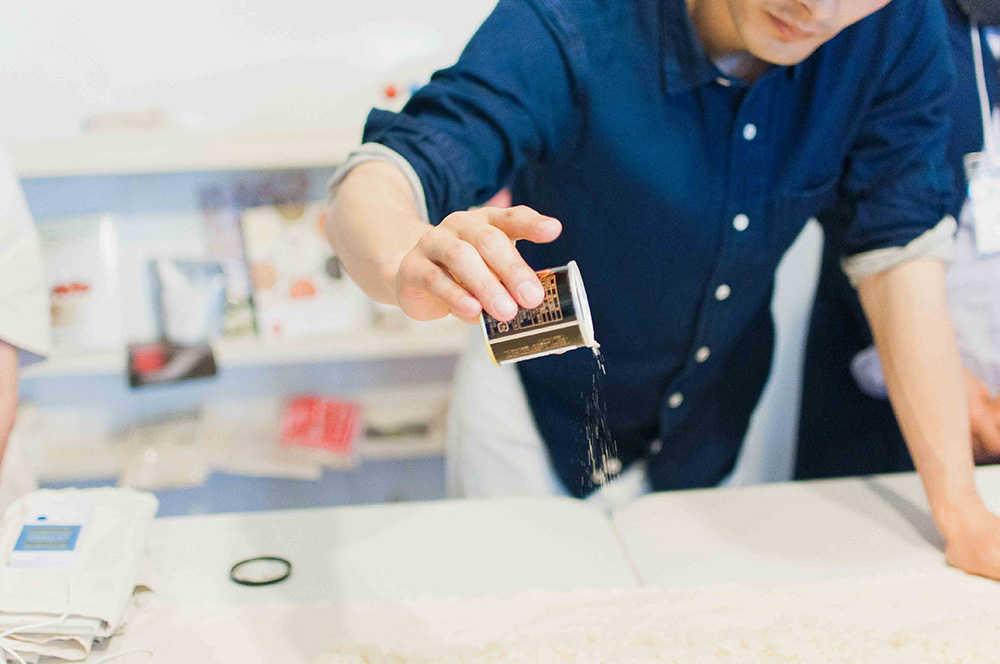 The average advised amount of seed Koji is 1g per 1kg of rice. If you are beginner, you could add roasted barley flour or rice flour to double the amount. In fact many farmers used this trick in our history too.

Nakaji spread the rice to 3 cm thick, and sprinkled seed Koji over it in three steps. After every time he did this, he waited for a moment until spores land on the grains. Then he divided the rice in quarter shape and flipped it upside down to sprinkle the next batch of spores.

This is his style built on his experience working at Terada Honke Natural Sake brewery in the past. It was very systematic and efficient. Important is to make sure that there is no wind or air to disrupt the spores falling straight down on the grains.

“You must make sure that every grain has at least one spore each. If not, that grain would just stay a steamed rice grain all the way till the end. Also make sure to close windows and stop your air conditioner…and your running kids!”, said Nakaji.

So now we wait for the rice to “bloom”. Keep it warm and check before you go to bed 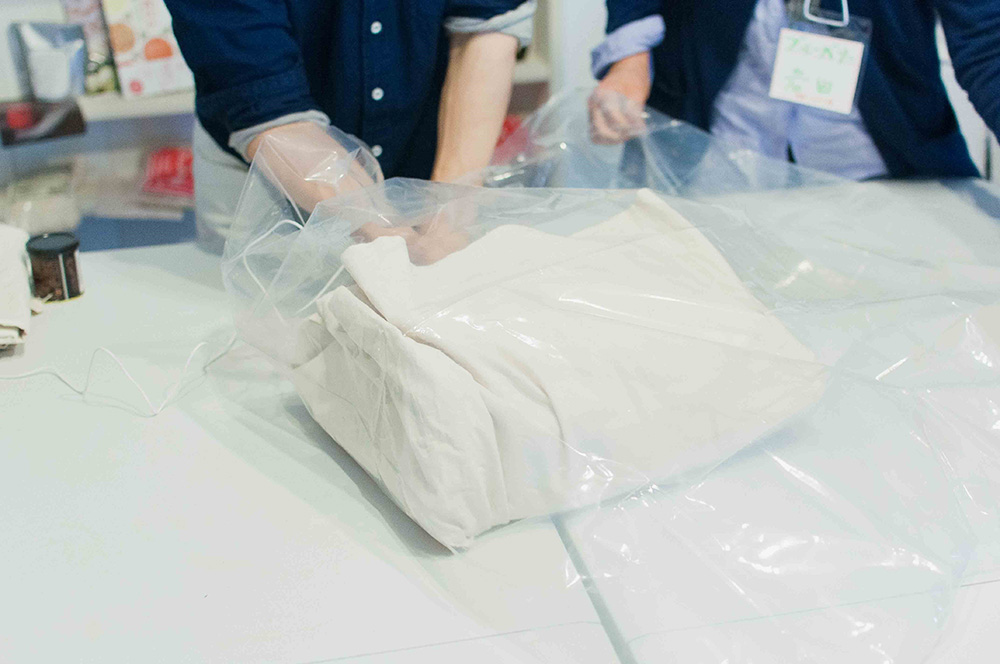 After that, he quickly wrapped the rice with canvas before it gets too cooled down. The temperature of rice was around 33 °C by then. In order to keep it warm and moist enough, he covered the canvas with a plastic bag and a blanket. For an extra heat, hot-water-bag was used. The ideal temperature of the rice is around 32°C.
Then we were told to wait for 18 to 24 hours.

During waiting though, we were advised to open the bag once at 8 to 12 hours mark from the moment we wrapped the whole thing.
This is called “Kiri-kaeshi” and the rice in the centre and in the corner must be swapped. It is to make the entire rice incubated evenly. However, this step is not necessary if the temperature of the rice is below 30°C. If you opened the bag under this condition, the rice would lose too much water and the temperature would drop dramatically.

See how the rice looked like at 8 hours mark below. 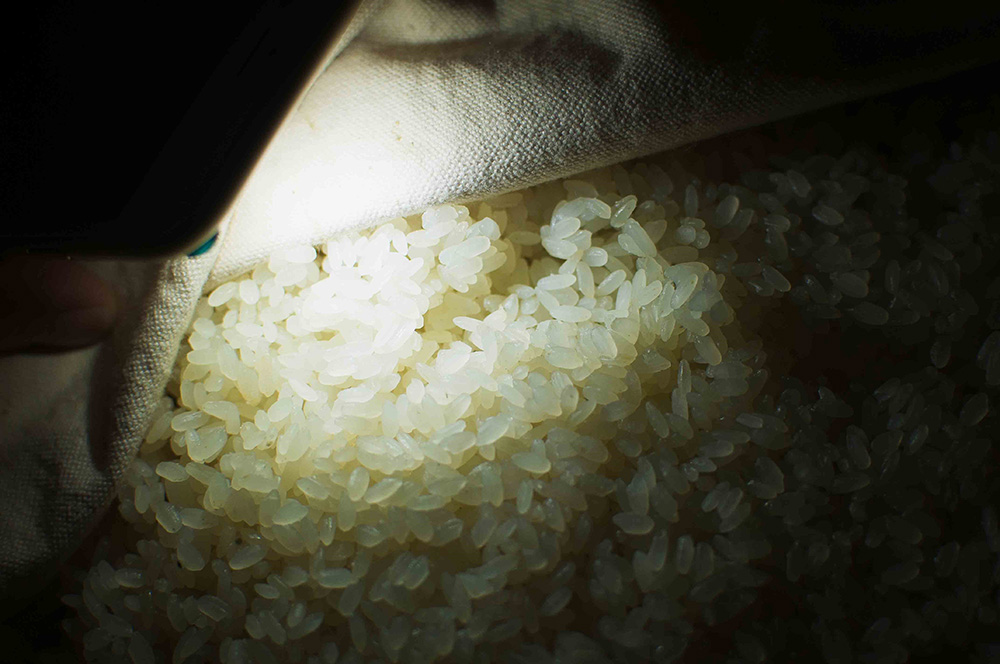 It may be hard to see, but you can spot a tiny white eye showing up on each grain. This is the beginning of Aspergillus Oryzae growing on rice.

Again we broke up the lumps and mixed it with everyone, and at the same time leaned the texture of rice and felt the temperature at this stage. 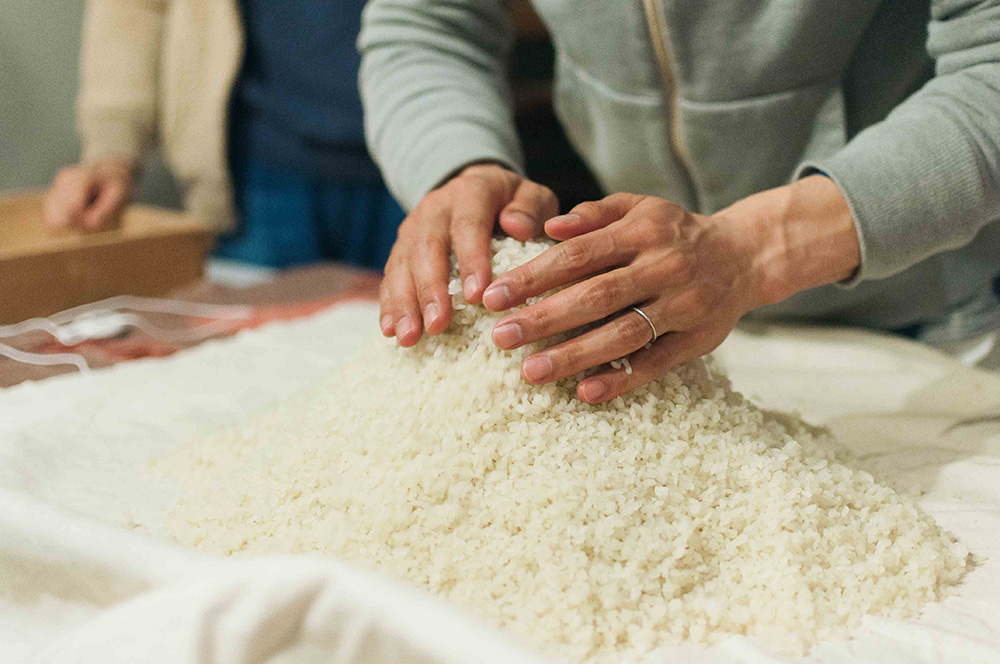 At 23:00, the first day of Nakaji’s Koji camp brought the curtain down. We all were already full-filled with new information and happy with hands-on experiences that made us too excited to go to sleep.
Still 2 days left, which would be written in the next article.