After the intensive kick off, the second day of Koji camp with Nakaji started. Today Nakaji teaches us the detailed process of Koji making and brings us further into the cycle of life on earth.

Again we were spoiled with heart-warming breakfast prepared by Masako. Many participants actively help her in the kitchen, that proved that all participants had some sort of talents. Quite many were specialized in wild herbs, and one of them woke up very early for weeds hunt, came back with hands full of Japanese mugwort to make “Yomogi” shot for everyone. 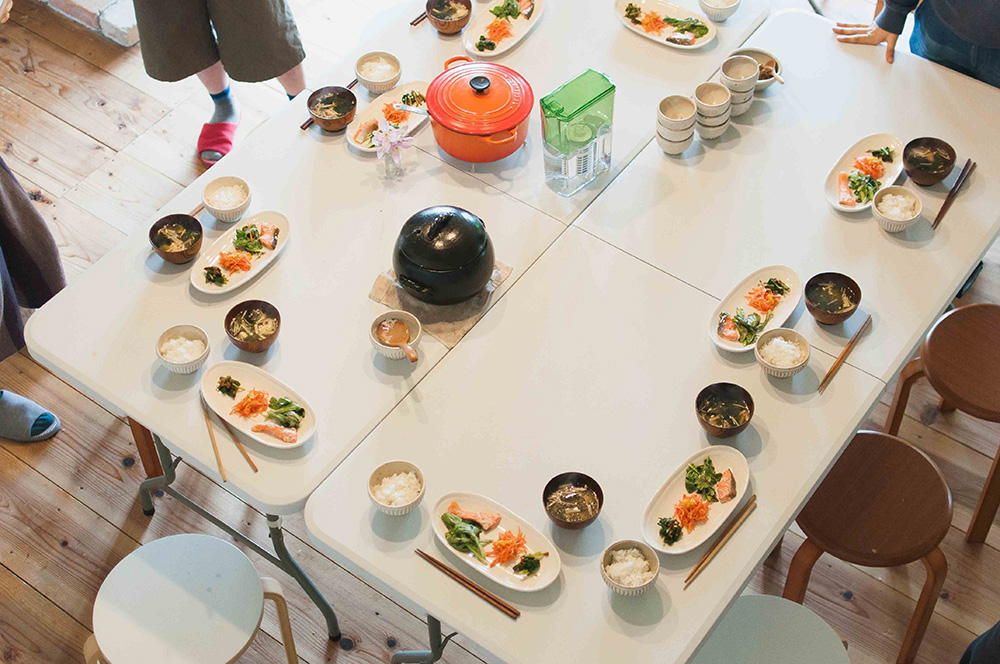 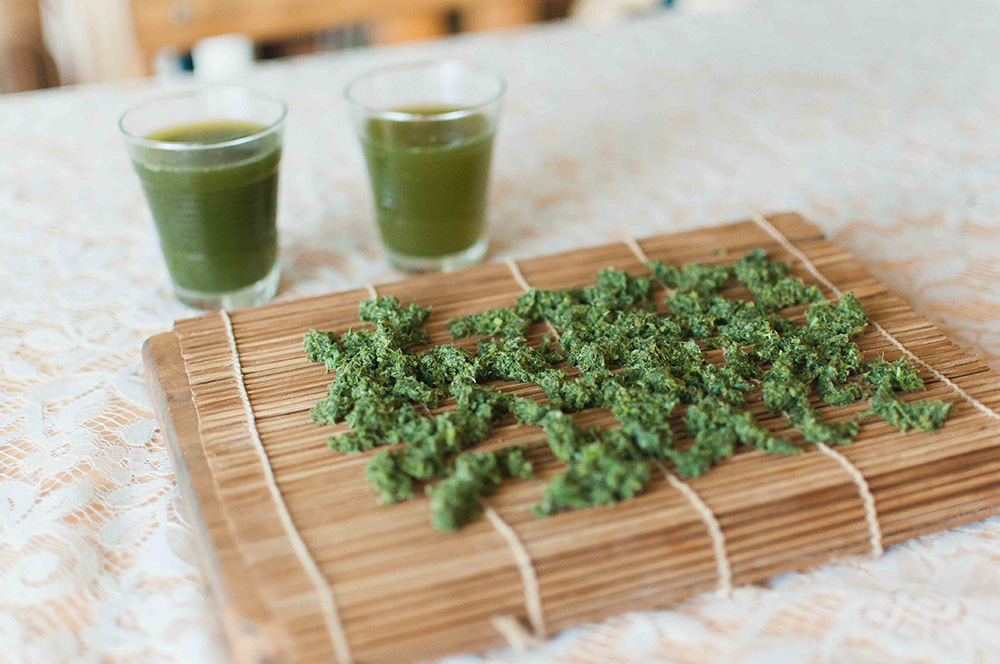 Nakaji teaches all process of professional Koji making. Is your Koji suitable for Miso or Sake making? The temperature control is the key.

After the breakfast Nakaji began the lecture of Koji making in timeline. In summary, the process is divided into the following steps;

– “Mori”: transferring rice into a tray after 24 hours from the point you inoculated seed Koji. The ideal temperature of Koji after this step is 34 degrees. In case the rice was already below 30 degrees, it’s better to postpone this step otherwise the rice loses too much moisture and the temperature would drop dramatically. Up to this 24 hours mark, Koji-kin is supposed to germinate.

– “Naka shigoto”: to be done at 28 hours mark. Break up the lumps and lower the temperature to 36 degrees. From here for the next 4 hours is the time for mycelium to grow.

– “Shimai shigoto”: to be done at 32 hours mark. Here we try to make the temperature of Koji down to 38 degrees. From this point on, we must make sure to keep Koji not to exceed over 50 degrees. If it does, Koji would be “burned”. The last 12 hours would be the time for enzyme to grow.

Nakaji said that Koji produces enzymes during feeding itself. The enzyme melts the surface of rice grain in order for mycelium to break through. The mycelium would stretch deeper inside the grain through the tunnel, and produces more enzyme.
We talk about Koji making a lot, but for what do we want to make it? The initial reason is to make enzyme, and that’s for making fermented food. So more enzyme it has, the better it contributes for fermenting food. The next question is: how do we achieve that?
Nakaji’s advice are below.
 Sustain the adequate humidity. Too much moisture would create a favorable environment only for spores to grow. This means less enzyme. Don’t be obsessed with puffy look of Koji.
 The temperature rules the destination of Koji. Koji made in rather overmuch moisture would have more protease. This enzyme breaks down the protein into amino acids, and likes the temperature range of 28 to 35 degrees.

The mycelium searches the moisture while growing. First they spread the mycelium on the surface of grains, and when they hit protein and fat on the surface of grains, they produce protease to melt them down.
If there is not enough moisture, the mycelium would stretches toward the moisture inside the grains. Amylase is the necessary enzyme they produce to break down the carbohydrate to turn it into glucose. This prefers the temperature range of 36 to 42 degrees.

In the former case Koji would become suitable for Miso and Shoyu, and the later for Amazake.
For these reasons Sake industry doesn’t like puffy Koji as it colours the beverage and adds too much acidity to the taste. 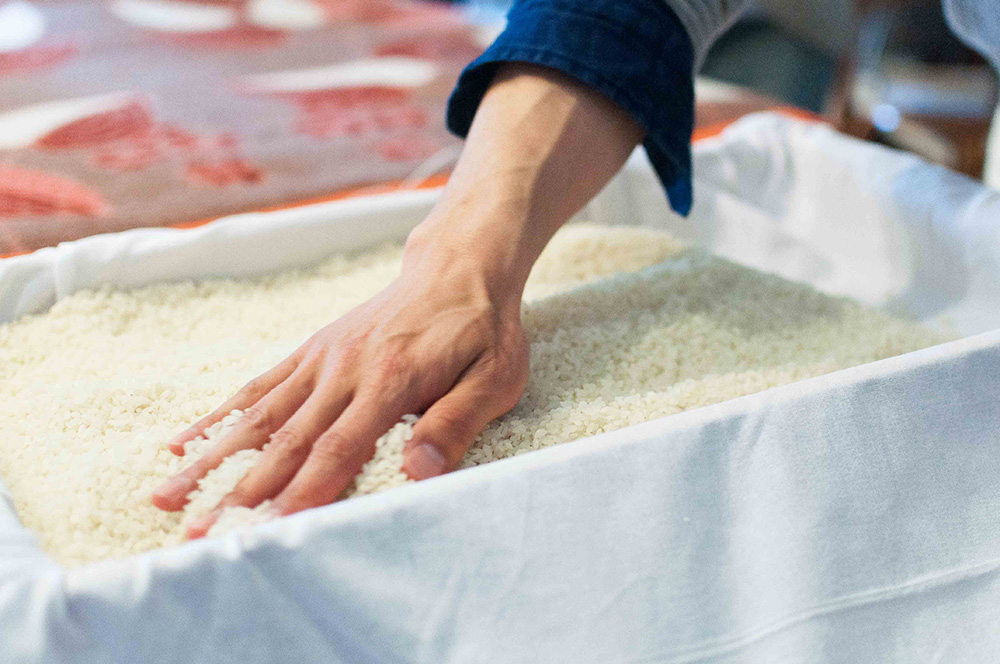 Spreading the rice in a bigger tray. 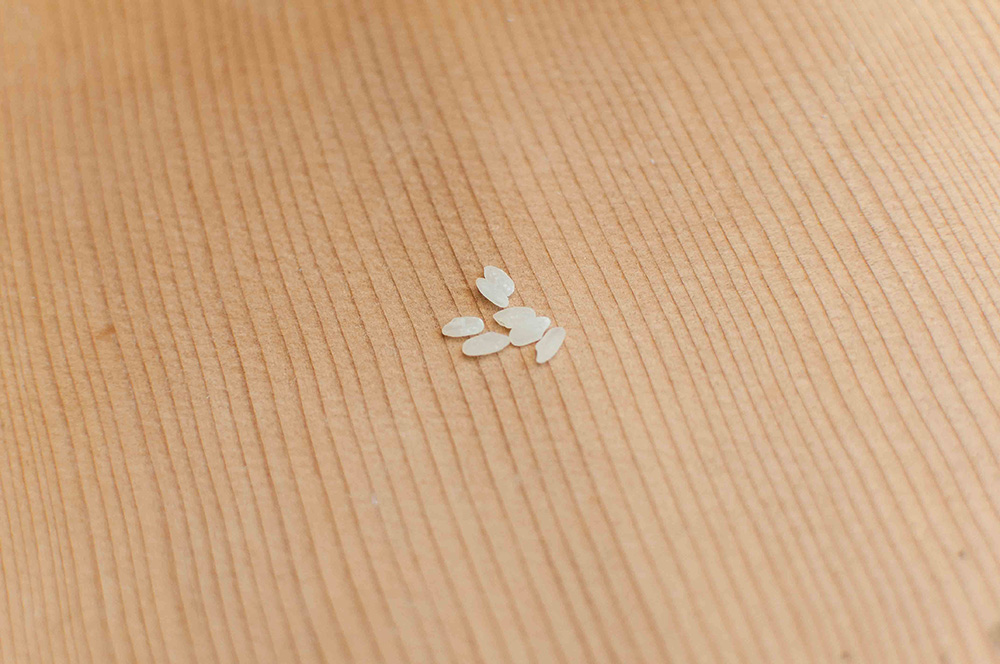 We could see the white spots (mycelium) on the surface.

In the afternoon class, Nakaji talks about history and rules of Koji fermentation. 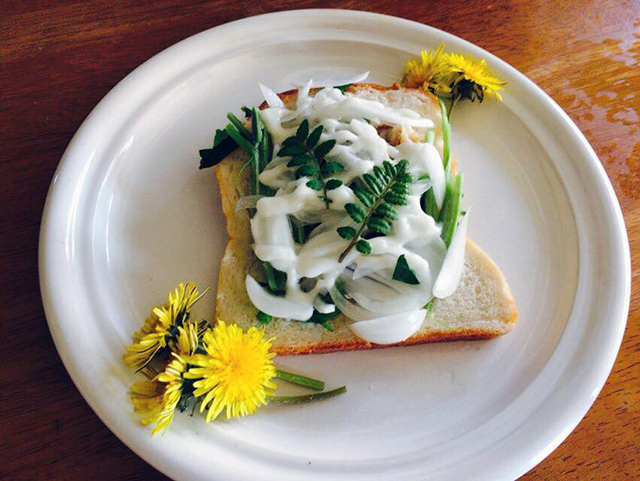 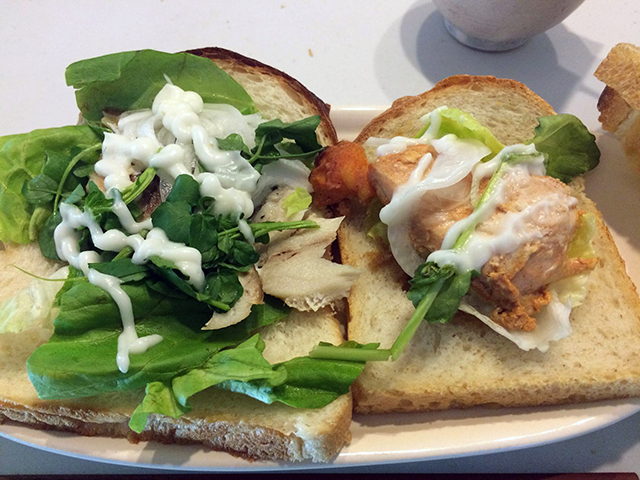 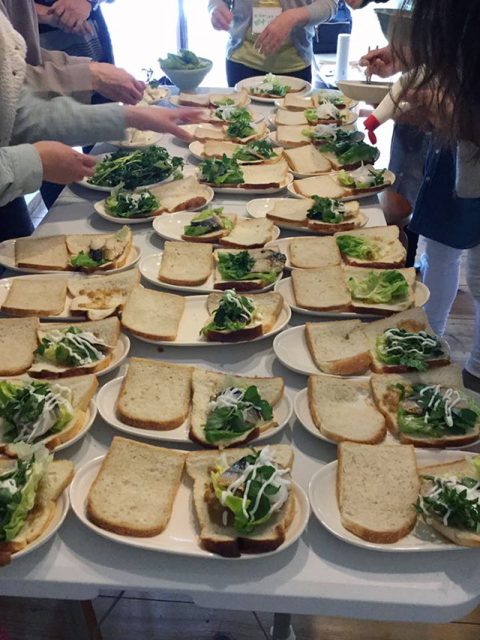 After lunch (sandwich made from breads that contain Koji powder and “hellacious mackerel” from monosugoi.shop and chicken), we dive into the history of Koji.

The word Koji, derived from the word “Kamutachi”. “Kamu” means “from above” and “Tachi” means “to appear” or “to rise from zero”. So “Kamutachi” means “new mold appeared on rice”. The word transformed into “Kauchi” then “Kauji” and through 300 years changed into “Ko-ji” that we pronounce today.

Nakaji explained that Japan is the only country that worships everything – even mold. “Umashiashikabihikoji” is the name of god for Kabi, and this means “the god that rises from good rice”.

So where does this Koji come from?
When you go to a rice farm in Autumn, you might spot moss green mold on rice stalks. This is a symbiotic fungus that appears often when the rice is fully matured. The grain falls down to the ground for procreation, and auto-digestion starts. Then natural yeast would jump in, turn it into alcohol, and then acetic acid bacterium joins to turn the alcohol into vinegar. This is the natural process of fermentation.

Making Koji with a professional Koji maker at a traditional Machiya house in Kyoto (Vol. 1)