Hekinan city is the centre of Mikawa Mirin, the south of Aichi prefecture that is known as “fermentation paradise”. The district faces Mikawa bay and is blessed with almost all Japanese fundamental ferments such as Sake, Mame Miso, Tamari, Shiro Tamari and Mirin. Here is my diary back in spring this year when Ayako Sumiya, a daughter of Toshio Sumiya the head of Sumiya-Bunjiro Shoten showed us around the manufacturing scene of Mikawa Mirin.

Difference between Mirin, Amazake and Sake

So what exactly the difference in those? Ayako answered to this question coherently. If you look at them, you’ll notice that nearly all the ingredients for these ferments are the same. First of all, Amazake is made from rice Koji and rice. The common way to make it is to keep the mixture warm at 50-60 degrees for about a day. This is a relatively instant type of fermentation for Japanese standards. This method enables Koji-kin aka Aspergillus oryzae to produce starch degrading enzyme for creating glucose or “Amami”, the Japanese word for sweetness.

On the other hand, Mirin is made from rice Koji, Mochi rice (sticky sweet rice) and Shochu. Unlike Amazake, Mirin requires Umami as well as Amami. This means that the fermentation at ambient temperatures for three months is the way to go. This way, Koji can produce protein degrading enzyme to deliver Umami, and at the same time Shochu can moderate the speed of fermentation. 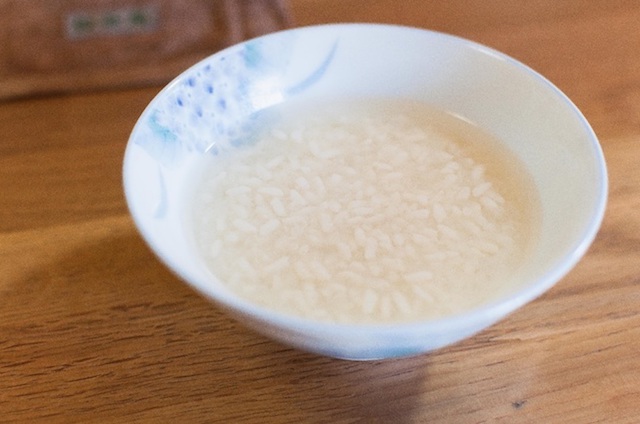 Amazake made from Mochi rice used for Mirin making

As the facilities required for Mirin making is nearly the same as that of Sake, some breweries make both. What needs to be mentioned here though, is that Hekinan has had many independent pure-play Mirin makers since more than 2oo years ago. The district is still credited as Mirin estate and many still devote to Mirin making only today.

Aichi prefecture is “fermentation paradise” that gave birth to Hatcho Miso (Mame Miso) and Tamari Shoyu from Taketoyo town for example. Hekinan city in particular is a mecca for Mirin making, and has pure-play 5 Mirin makers today. Another local Hekinan specialty is Shiro Shoyu, a light amber colour Shoyu that is made from wheat only. The neighbouring city Handa is a birthplace for Mitsukan vinegar and now has a Mitsukan museum along the canal, just a short walk from JR Handa station. In Tokoname city, we have Sawada Sake brewery that is famous for their product “Hakuro”.

As you can see, Mikawa district is a very unique area that supplies almost everything you need in your kitchen. The area has warm and mild climate and a rich source of fresh water from Yahagi river. On the top of that, Sake making has been thriving in Mikawa area since Edo period and even had more Sake breweries than other centre of Sake such as Nada in Kobe or Fushimi in Kyoto once. That means that they had stable source of Sake lees, which they used to make “Kasutori Shochu”. Kasutori Shochu is made by distilling the sake less (“Sake Kasu”, in Japanese), and this Shochu was used for Miring making then. Interesting background behind the scene when people had less access to the supply of rice and lacked their brains to come up with the alternative.

In late 1900s, the population in Hekinan was 30,000 and there were 20 Mirin makers. Now it has come down to 5 makers with the population of 70,000 but that still makes the number one in the nation.

Now Ayako guides us into the brewery that they make and bottle Mikawa Mirin. Sumiya Bunjiro Shoten has a separate location for Shochu making and rice milling. Their premium rice they use is carefully selected at a rice farm, and the brown rice is sent directly to Sumiya Bunjiro Shoten for milling. Whereas many Mirin makers outsource most of the ingredients, Sumiya family prepares everything from scratch. The selection and milling of rice and making Koji must be done in-house. No surprise that it is their routine to steam cook 3 tons of rice a day… 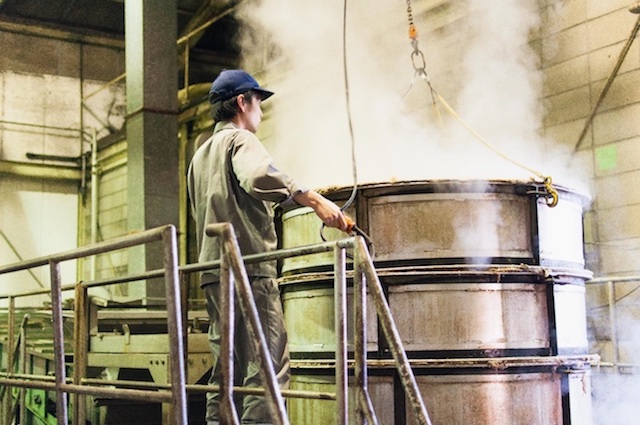 I could see the actual moment of steaming the rice. This can only be seen in the season of making Mirin. 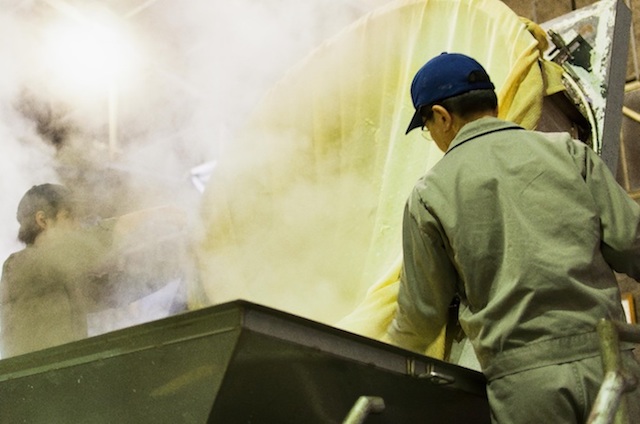 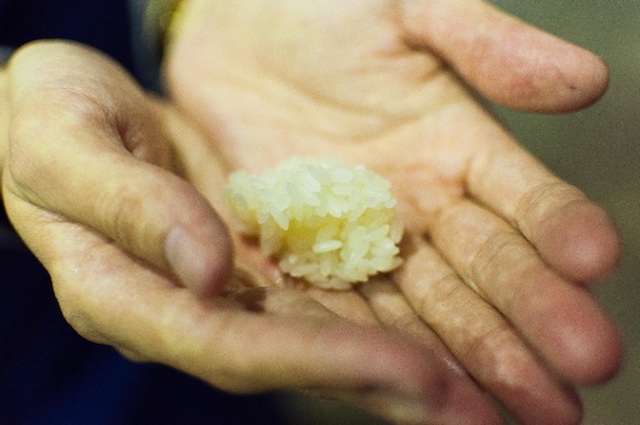 After steaming, the rice is let cool then mixed with Koji and Shochu. The mixture is kept in a tank for aging while occasionally being stirred by hands for three months. 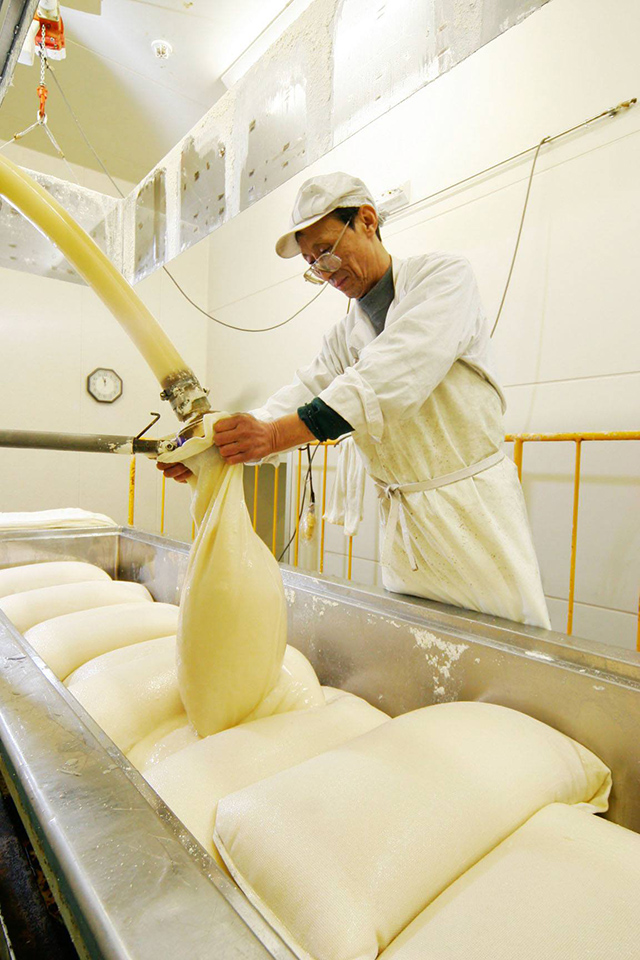 Sumiya’s family starts making Mirin twice in a year: spring and autumn. What they prepare in spring is pressed in summer, and this step has to be done in a clean room in order to avoid insects flying in.

For pressing, they use a 40-years-old machine called “Fune” (literally means boat, called for its appearance), which allows the traditional way of pressing Sake or Mirin. Moromi (Mirin mash) is put in canvas bags and stacked in Fune. First, they let Mirin drips out naturally by its own weight, then use the pressure to squeeze the last bit out.

The squeezed liquid Mirin-to-be is kept in a storage tank for more than a year. During this period of aging, Mikawa climate brings the Maillard chemistry in the liquid and turns its colour into amber. At the same time, it brings the mellow flavour in a great balance of Amami and Umami. 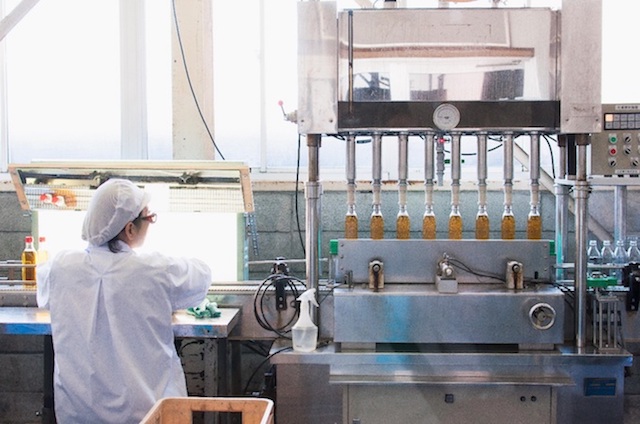 No pasteurization is done after aging. Mirin is directly bottled with living enzyme.

Sample tasting Moromi before and after pressing

Ayako first brought us Mirin Moromi before pressing. It tasted like a mushy sweet dessert with a bit of alcohol touch. Quite a valuable experience we had, as this Moromi is never put out into the market like Shoyu Moromi is. We got lucky to visit Sumiya Bunjiro Shoten in the right timing. 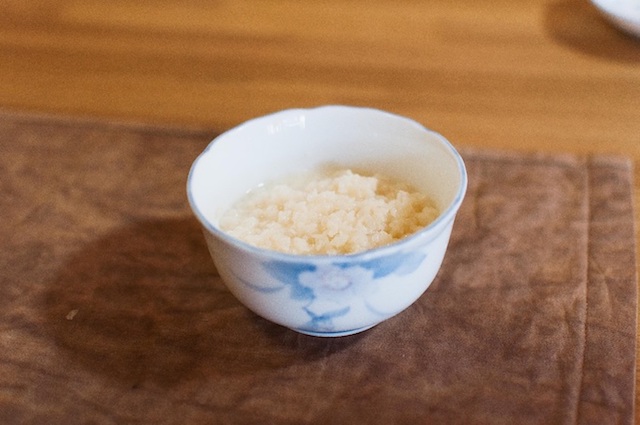 Next Ayako let us try Moromi after pressing. This is commonly called “Mirin Kasu” in Japanese, but also has a nickname “Kobore Ume”, referring to its appearance of small Ume or plum flower flakes in full bloom. 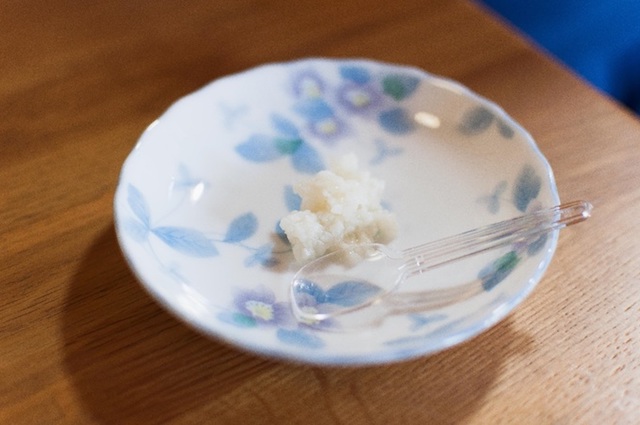 Kobore Ume is sweet and delicious. It is available in the market for limited seasons. 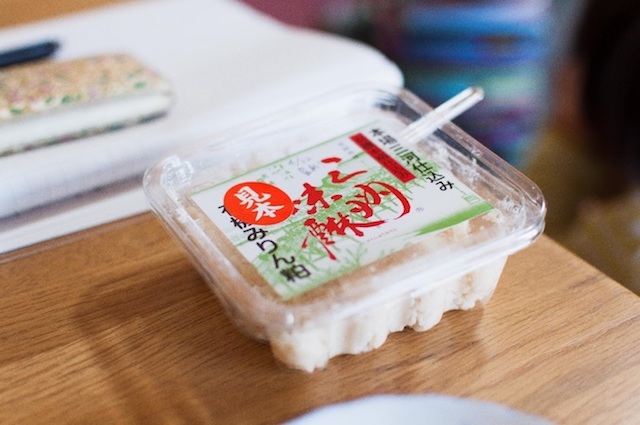 Sumiya’s policy: “One bottle of Mikawa Mirin is made of the same amount of rice”

As many Mikawa Mirin admirers know, one bottle (1.8L) of Mikawa Mirin is made of the same amount of rice. It’s made in a traditional manufacturing method that extracts the natural sweetness of glutinous rice without adding any artificial sugars. This method was once prohibited due to the shortage of rice in World War II, which leads to the temporal termination of the entire Mirin manufacturing from 1943 to 1951. After that, Mirin was once again allowed to make, but there was a very limited supply of ingredients and Mirin itself was subjected to high alcohol tax. Just to give you an idea, a simple Soba noodle bowl was 30 yen then, and Mirin was 1000 yen including 762 yen of alcohol tax!

Sumiya family strictly keeps this traditional method as well as the commitment to use the special cultivated rice or organic rice to make their Mirin. 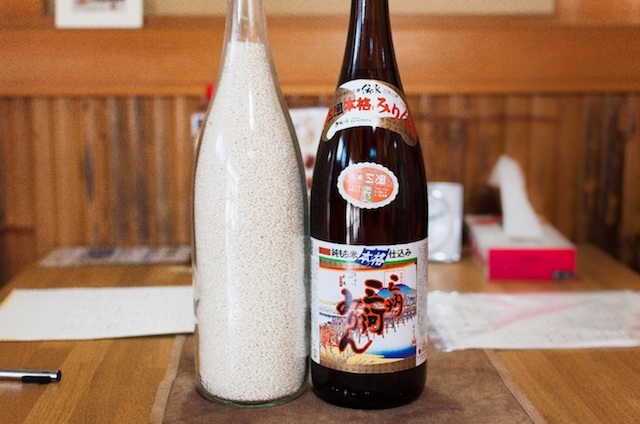 Before the lecture ended, I asked Ayako if there is any expiry date on Mikawa Mirin. Ayako’s answer was straightforward: “Our Mirin is non-pasteurized, so enzyme stay alive. This means that the colour of Mirin gets darker over time, and the balance of Umami would overcome Amami. I would recommend you to use it up within a year if you want to enjoy its original flavour.” 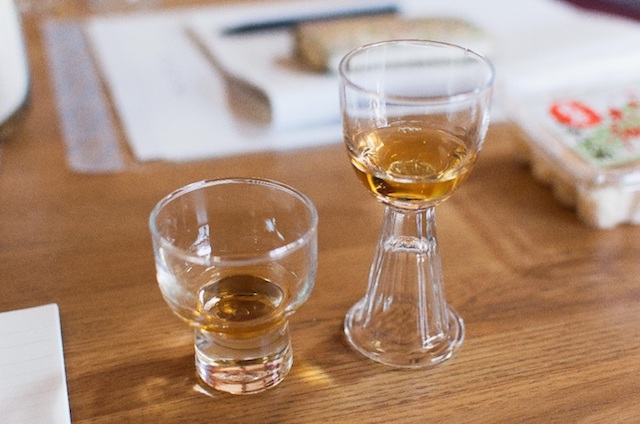 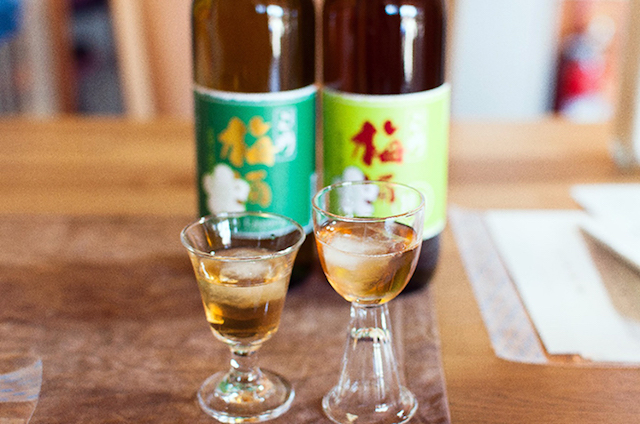 Sample tasting plum wine made from Mikawa mirin (Left: 14% dry ver. Right: 10% concentrated ver.)
Both can be enjoyed with ice or straight up.

Finally, Ayako gave some extra tips on how to enjoy Mikawa Mirin.

・Soak dried nuts or raisin in Mirin instead of rum.
・Mix balsamic vinegar and Mirin, and make sauce for meat dishes.
・Boil down Mirin and pour it over blue cheese. Enjoy as a dessert.
・Substitute sweetener for coffee and tea.
・Mix Mirin Kasu, Mirin, Shiro Shoyu and salt to make a pickling bed for vegetable.

All sounds intriguing, right? I’ve personally tried soaking raisin in Mirin and served it with homemade soy yogurt to my guests, and they loved it!

Sumiya Bunjiro Shoten is not exclusive in Japan. The family eagerly travels to abroad, attending food fairs in France and Germany to deliver the excellence of Mikawa Mirin. The effort has already been paid off: there already are hefty amount of Mirin fans all over the world.

So if you ever visit Japan for holiday, you may seriously want to consider buying a bottle of Mikawa Mirin, or even Umeshu (plum wine) made of Mikawa Mirin for a souvenir gift to your friends. Or to yourself.