2017 began with a fervorous start for Tokyo’s hacco fans.
Sandor Ellix Katz, pioneer and advocate for fermentation cuisine and author of the award winning book Wild Fermentation was visiting Japan for the very first time.
When the haccola team heard that he was going to be leading a sauerkraut workshop as well as give a talk at Daylight Kitchen, a popular organic café in Shibuya, we wasted no time in booking ourselves a spot! 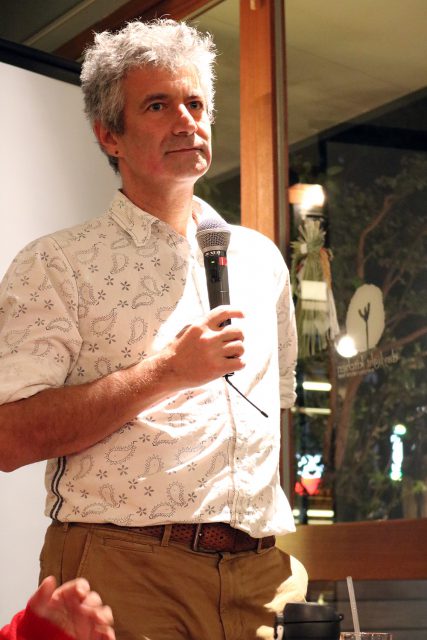 Making sauerkraut with the “living legend of fermentation”

There are some who recognizes Sandor as a “legend of the fermentation world”. His best selling books Wild Fermentation and The Art of Fermentation have been translated into several different languages and sold around the world. 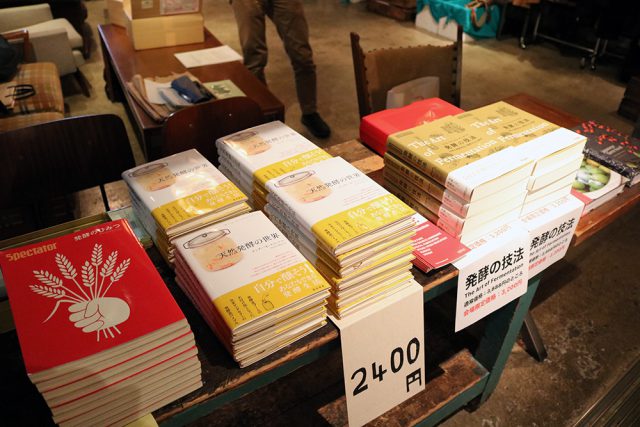 Although workshops and seminars have so far taken him to many corners of the globe, this was Sandor’s first visit to Japan.
“After making miso and tsukemono for 24 years, I’m finally able to visit this country,” he told the crowd with a smile.

And what better venue than Shibuya’s Daylight Kitchen?

Daylight Kitchen is a well established organic restaurant located close to the heart of Shibuya. 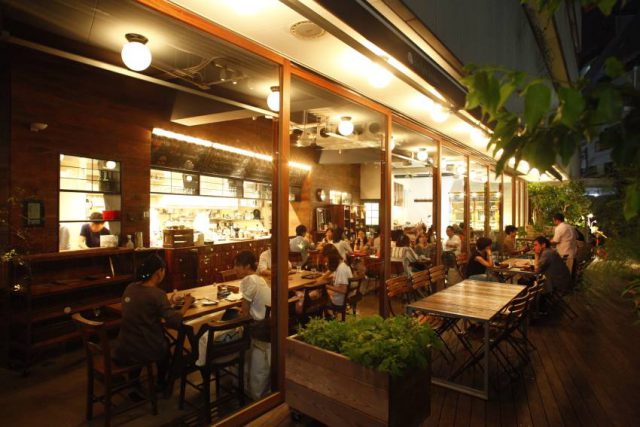 The timber-clad venue provides a hip and welcoming atmosphere in which customers can relax and enjoy their time. The restaurant also produces special organic menus for corporate staff cafeterias as well as host a variety of food related workshops and events. It’s simply a one-of-a-kind place!

During the evening, Nancy Singleton Hachisu, another international food writer and advocate joined Sandor to bring extra vigour to the talk show. 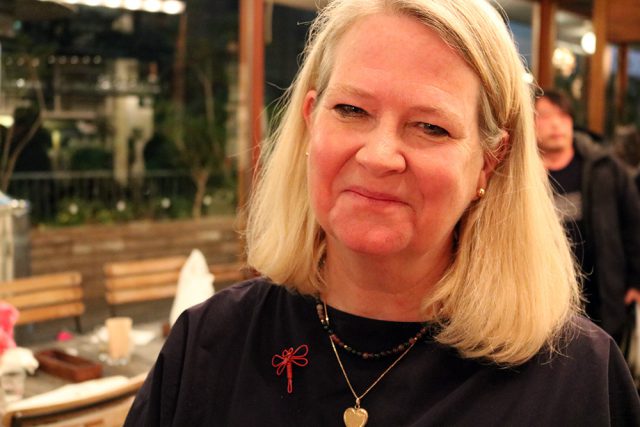 Nancy is another food media pioneer who has been writing and promoting traditional Japanese farm life and food culture ever since she arrived in Japan from California in 1988. Her published works, Japanese Farm Food and Preserving the Japanese Way, have been long time sellers in English and France. Beautifully designed and visually stunning, both books are well worth getting a hold of!
Nancy has also written a book in Japanese titled “スタンフォードの花嫁、日本の農家のこころに学ぶ” (“The Stanford Bride Learns the Way of a Japanese Farm”) in which she shares her life story and life on her family’s organic farm.

Time to learn the incredibly easy process of sauerkraut making 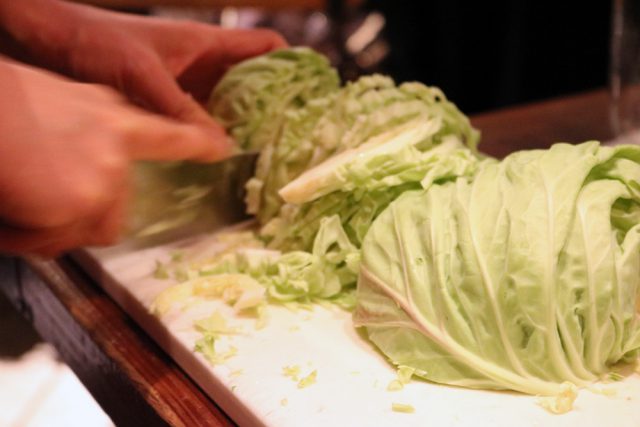 Before the workshop began, Sandor instructed just one rule for the participants: Make sure ALL the cabbage is soaking in the brine.
Pretty simple, right?

The reason the cabbage must be completely submerged is because it’s easy for mould to appear when the solid pieces are touching air. Although mould is just another result of fermentation, it prevents lactic acid bacteria and other microorganisms from doing their job. For a smooth fermentation, we were told that it’s important to squeeze out all the water from the vegetables, then to press all the vegetables into the water.

Each participant was given a kilogram of organic cabbage harvested from Nancy’s friend’s farm. Once chopped up, the cabbages were massaged with about 20g of natural salt before being pressed into a litre jar.

“It’s not absolutely necessary to chop them into tiny shreds,” called out Sandor, demonstrating his love for open minded creativity and variety. “Sauerkraut can be just as tasty when chopped up into big chunks. Don’t let yourselves be dictated by the idea that it has be shredded.” 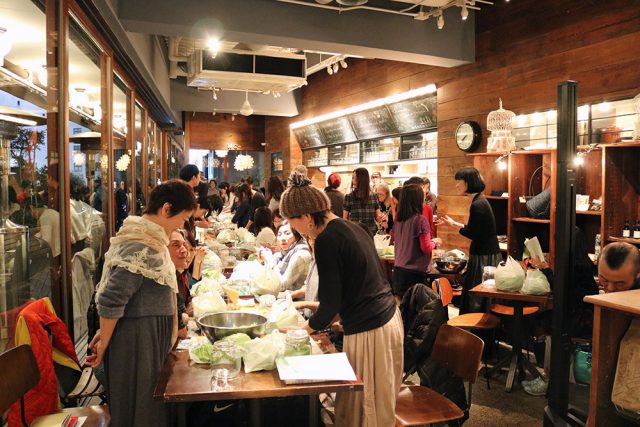 Inspired by his freethinking philosophy, the participants were quickly starting to interact with each other as they excitedly began to work. 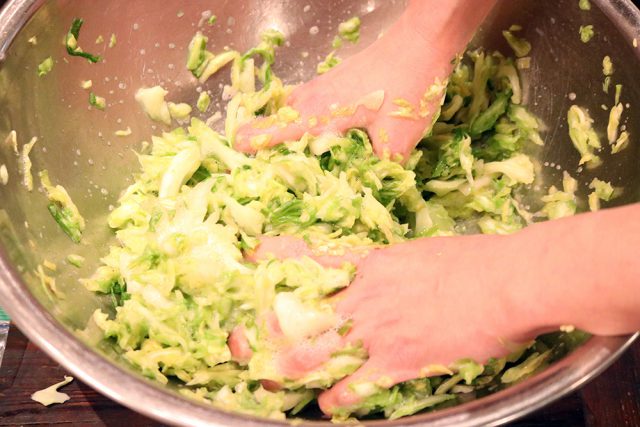 Use both hands to thoroughly massage out enough liquids… 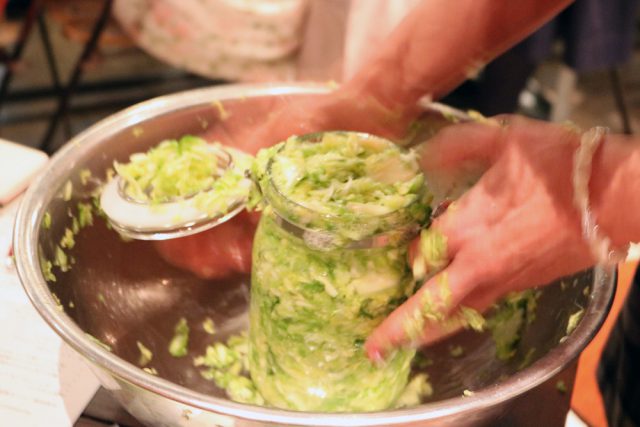 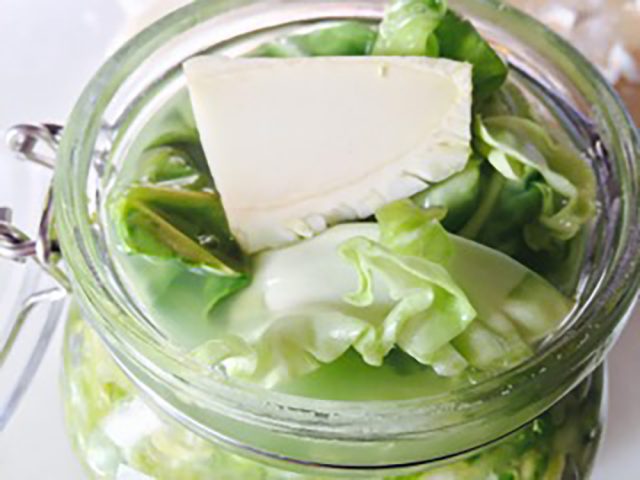 And finally, lay down an outer leaf on top like a cover, then place a piece of cabbage core to further push in the cabbage once the lid is closed.

So many questions from the audience!

There were many questions popping up from the tables as participants tried their hand at sauerkraut making. Sandor strolled around between all the tables to give answers and suggestions. 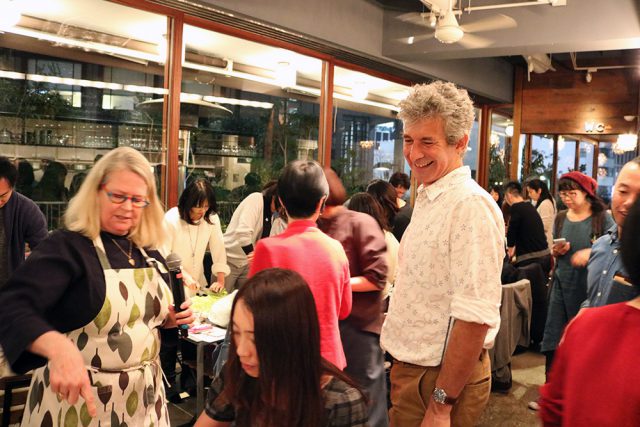 Q: How well should we wash our hands and jars before we start?
A:The jars that we’re using today have already been washed in hot water by the staff at Daylight Kitchen. If you’re still concerned, you can certainly wash your hands before starting, but there’s no need to use soap or disinfectant. We all have bacteria and microorganisms living on our hands, and they’re what help our homemade fermented foods become unique and tasty.

Q:What other vegetables could we use aside from cabbage?
A:Anything that’s seasonal is great. I sometimes like to pickle whole carrots and cucumbers, or adding sliced apples to the mix.

Q:What about herbs?
A:Adding herbs and spices into sauerkraut can make the final product extra fantastic. Choose whatever you please. Caraway seeds, laurel leaves or chopped ginger are some popular ones. Personally I like adding a little bit of garlic or chilli in mine. These can be added along with the salt and mixed thoroughly – except for the chilli, which should be added at the very end. I really don’t recommend mixing that in with your bare hands.

Q:So how long should we wait before we can eat this?
A: I usually like to wait until the fourth day, but some people say the third day or the seventh day is the best. It all depends on your taste. What’s important is to keep a close eye on the fermentation process and notice how the vegetables are changing.

Q:I had mould problems the last time I tried doing this. What should I do if it happens again?
A:If you see spores on the surface that could be mould, don’t panic, and certainly don’t throw it all away! You can simply remove the mouldy parts from the mix and make sure all the solids are completely submerged in the brine. 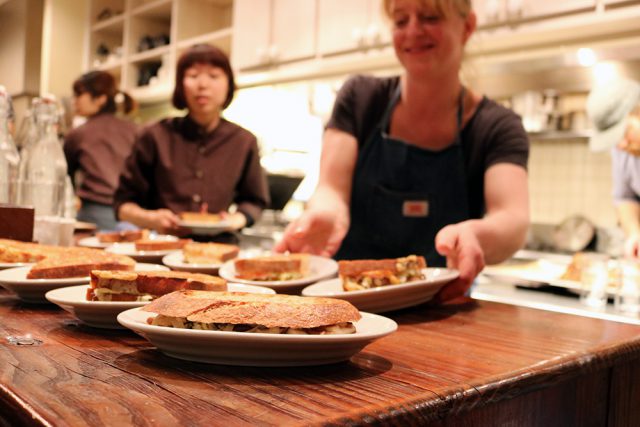 Once all our sauerkraut had safely been tucked into its brine, the participants were treated to a special light meal created just for this day – a delicious grilled sandwich filled with fermented ingredients. 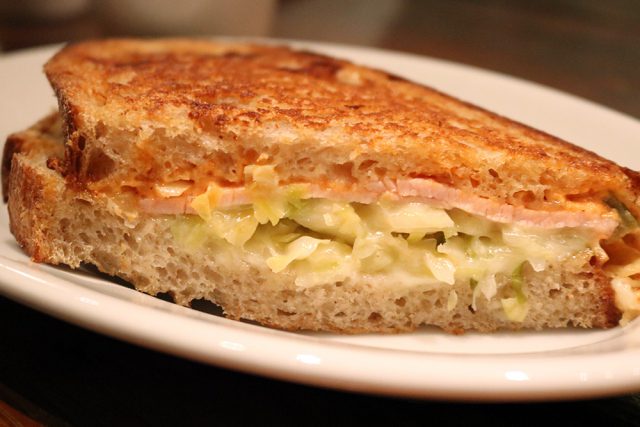 The sourdough bread was supplied by Katy from Garden House Crafts, a Daikanyama deli and sandwich shop endorsed by some of Tokyo’s top chefs. The sandwiches contained sauerkraut, gruyere cheese and ham provided by Sandor, and a spread of Nancy’s homemade pickles sauce. 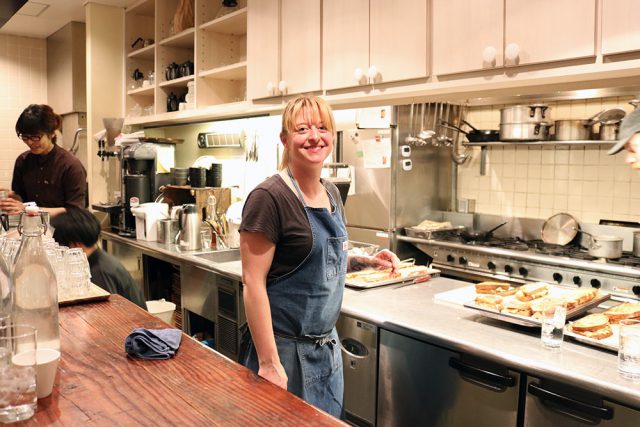 Katy is the chef who can satisfy your cravings for quality deli meats and sandwiches at Garden House Crafts, Daikanyama.

The talk show commenced while we enjoyed the sandwiches, and Sandor continued to give sincere answers to the many questions thrown out from the audience.
When one participant asked for his most favourite fermented food, Sandor immediate replied;

“You know, that is the worst, most terrible question anyone could ever ask me.”
After waiting for a few seconds for the laughter to die down, he explained that this question is asked at every single workshop he holds.

“Of course I have a particular fondness for pickles and sauerkraut. But I also love coffee, chocolate, wine and bread. A lot of foods loved around the world are fermented foods, so it’s too difficult to pick just one!” 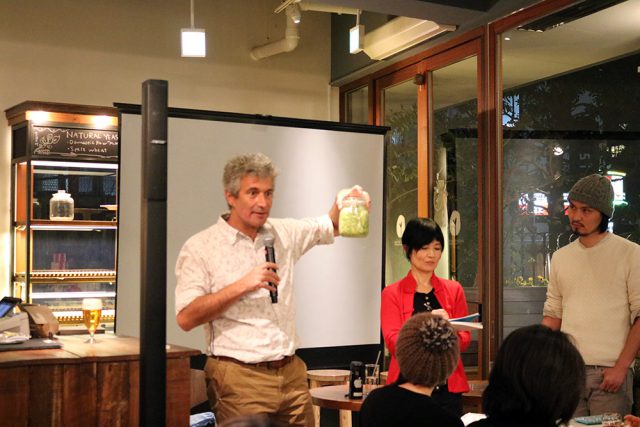 Participants were also interested to know his views on miso. One of the most surprising statements came when he was asked if he uses beans other than soy to make his miso, to which he replied:
“You know, in the 24 years of making a lot of miso, I’ve probably used soybeans less times than any other kinds of legume.”

”I make my miso with chickpeas, adzuki beans, or beans and legumes common from the Middle East. What you have to remember about miso is that using soybeans isn’t the only important thing about making miso – the amount of koji, the salt ratio, and the duration of fermentation are also necessary factors.”

“Miso made from legumes other than soybeans taste just as complete and flavourful once they’ve fully matured. You won’t even be able to taste the difference from soy miso.”

“Perhaps Japanese people who have lived with fermented foods for many generations are more susceptible to thinking that recipes must follow the traditional way. But I’d like to encourage them to try thinking outside the box and trying all kinds of new methods – it would probably be a very important experience.”

When asked what kind of risks came with fermentation, he took extra care to answer;

“Fermentation is the transformation of food caused by microorganisms. It’s a basic and simple and very safe process that can increase nutritional value and doesn’t harm anybody.”

“I wouldn’t really say there are any risks, but if I were to make one suggestion, you should pay extra caution when fermenting animal derived products. When attempting to ferment fish, for example, it’s better to have a clear vision of how and what you’re aiming to produce.”

“I prefer fermenting vegetables because anyone with 30 minutes and the right information can do it so quickly. For anyone interested in fermenting animal derived foods, I strongly suggest equipping yourself with a little more necessary information.”

We asked a participant for their feedback

For Yuka Takei, a yoga instructor who runs classes in and around Tokyo, fermenting is a familiar concept, as she often makes her own soy yoghurt and other hacco foods. But this was her first foray into sauerkraut making, and she was particularly amazed at the way the large amount of vegetables could be softened and fitted into a 1 litre jar, only with the help of a little bit of salt.

“When Sandor explained how beneficial bacteria will grow inside the airtight jars, I felt gratitude towards vegetables, and the transformation that allows us to enjoy and benefit from their life energy.”

She picked up a lot of gems from Sandor’s words, and particularly found the miso making stories from overseas intriguing. “Hearing how he makes his miso from legumes other than soybeans, or whatever ingredient that is suitable for the region, left me with an impression of how much freedom fermented foods can have.”

She also felt that some of Sandor’s words could be applied to outside food – like how focusing your efforts on promoting good bacteria, rather than trying to disinfect and perish bad bacteria, was the key to solving the problem. 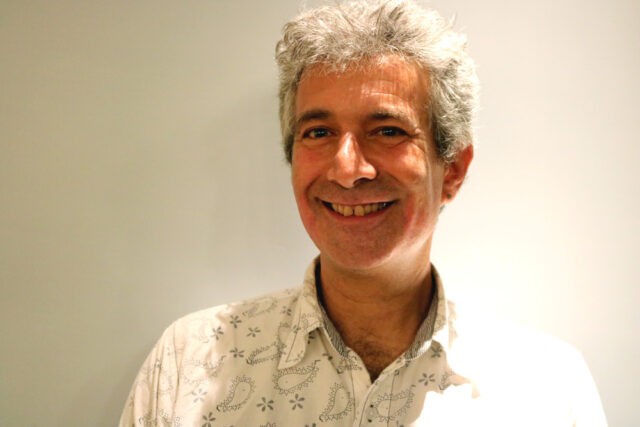 We were all intrigued by Sandor’s talk throughout the session, and time passed by a lot quicker than I realised.

As the event drew to a close, Sandor was asked about the relationship between fermented foods and social change, to which he gave a very fascinating reply.

“The word fermentation comes originally from the Latin word fervere, which means to boil or erupt. So aside from describing food fermentation, we sometimes talk about “political ferment” or “social ferment”.

“The image of “eruption” probably came from the way bubbles form during fermentation. So you could say that fermentation is similar to a movement started by people who get excited about something and start passing on that excitement until it spreads out to more people. That’s why I believe that involving fermented foods into our everyday lifestyles could be the engine behind social change.”

Sandor’s workshop allowed me to realise that we can continue to preserve the essence of tradition while embracing open and creative ideas.

In his constant quest for discovering the true essence of fermentation, Sandor shared us his view on contemporary society, saying; “We live in an age where we have to begin taking things back to its original form.”

That means returning to our traditional foods instead of simply criticising Western medicine and supplements. Now that sounds like a movement I can get involved in with ease. 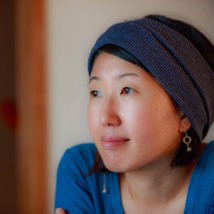